According to our description, there are many smell sensors and smell molecular synthesis pathways. Based on these facts, we are able to build a machine containing an E. coli assay that can record and reproduce a variety of smells. In our project this year, we took benzyl alcohol as an example to illustrate that our design can work well.

Here we will explain our design concretely and scientifically.


Our machine consists of 4 modules, the smell-sensing module, the memory module, the reproduction module and the erasure module.

The memory module is based on lux quorum-sensing system originally from Vibrio fischeri [1]. After it has received the signal from the smell-sensing module, it will initiate its positive feedback circuit, resulting in the continuous accumulation of a small RNA, taRNA [2]. The bacterial cells can keep taRNA for a long period of time and we regard this as its memory.

The erasure module is designed to make our machine reusable. The core functional part of this module is an enzyme named AiiO (acyl-homoserine lactone acylase) which can terminate the positive feedback of the quorum-sensing circuit. In this way, the machine will be recovered to its initial status [4].The outline of our design is shown below (Figure 1). 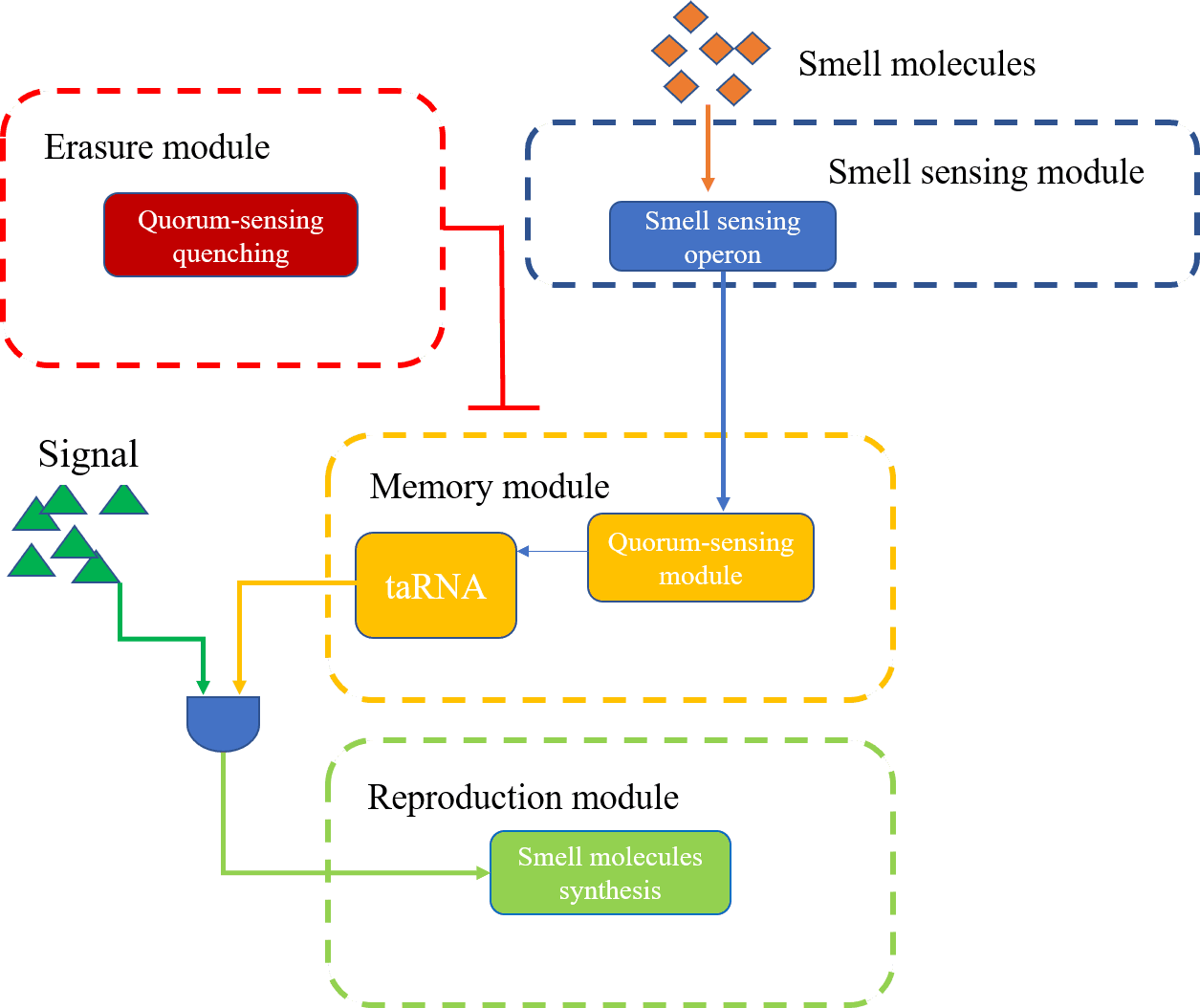 Figure 1. Outline of our design.


The smell-sensing module designed for benzyl alcohol was based on are operon originally from Acinetobacter sp. ADP1. The original function of the are operon is to regulate the utilization of benzyl alcohol as a carbon source in A. sp. ADP1. The operon is a positive inducible operon that contains a regulator protein gene areR , an intergenic region containing RBS and promoter and enzyme genes areCBA (Figure 2). AreR is an inactive activator. After binding with benzyl alcohol, it become active allosterically and activate the transcription of the genes areCBA [5] (Figure 3).

Figure 2. Brief pattern of are operon.

In our project, the areR gene is transcribed by a constitute promoter, J23102. The downstream of the intergenic region containing RBS and the inducible promoter is followed by an enzyme gene luxI. When the smell-sensing module has sensed benzyl alcohol, LuxI will be synthesized (Figure 3). To verify whether this operon can work well in E. coli , we replace luxI with gfp as a reporter (Figure 4).

If significant fluorescence can be detected after incubating with benzyl alcohol, the function of the smell sensing module will be verified.

LuxI is an enzyme that can synthesize 3OC6-HSL (We will call it AHL abbreviately in the following paragraphs), the auto-inducer molecule of the lux quorum-sensing [1]. The synthesis of high concentration of AHL will initiate the momery module.

There are three important elements in lux quorum-sensing system which are essential for the construction of the positive feedback circuit, protein LuxR and LuxI, and promoter luxPR. One signal is a crucial role to trigger the quorum-sensing, the AHL molecule. LuxR is an inactive activator. LuxR and AHL will form a complex which will make LuxR change to its active form allosterically and activate the promoter luxPR. Then, the promoter luxPR will initiate LuxI protein which will generate more AHL molecules to bind LuxR [1].

Since the LuxR-AHL complex will reach a constant amount, the transcription strength of the luxPR promoter will maintain stable. Account for this, the small RNA, taRNA, will continuously accumulate in the bacterial cells driving by the positive feedback. And we consider such accumulation as the memory of the bacterium.

To verify whether the circuit will establish a positive feedback, we construct the verification circuits below (Figure 6):

After adding the same concentration of AHL into the bacterial suspension that contains these two circuits respectively and incubating for the same period of time if the fluorescence intensity of the circuit above is significantly stronger than that below, the memory module will be successfully verified.


One drawback of the positive feedback circuit is its leakage. A little leakage of luxPR promoter will result in the synthesis of LuxI, generating more AHL that expand the leakage. If we cannot control the leakage well, even though the smell-sensing module hasn't sensed any benzyl alcohol, the memory module will still generate taRNA, causing a false positive result.

To handle this problem, we make three alternative plans. Plan I is quite simple. We tag an LVA flag on the C terminal of LuxI, hoping to decompose LuxI more quickly (Figure 7). Plan II is complicated. We utilize AiiO to hydrolyze excessive AHL. When the smell-sensing module hasn't contact with any benzyl alcohol, the Ptet driven AiiO will be expressed, hydrolyzing excessive AHL. After the smell-sensing module received benzyl alcohol, tetR protein will be expressed driven by the are operon. The tetR protein will inhibit the expression of AiiO, thus allowing for the initiation of the positive feedback circle. To maintain this inhibition, we append an extra tetR protein followed by the left luxPR promoter, so more tetR will be generated through the positive feedback (Figure 8). Plan III is to improve the dynamic characteristics of luxPR promoter by mutating its lux box, an upstream regulatory sequence. This approach will change the binding features of LuxR-AHL complex and may result in low leakage and high threshold [1, 8].

To test which plan is better, we design two test circuits for them.

The ideal effect of the leakage control circuit is that when the memory module hasn't received any signal, including signals from the smell-sensing module and manual-added AHL, no reporters (mRFP or amiCP) can be detected.

To achieve this goal, we make this switch an AND gate. The switch includes two levels of regulation, the transcription level and the translation level. The transcription level is controlled by a lac promoter which can be induced by IPTG under one's will. The lac promoter can transcribe synthetase genes that contribute in the synthesis of benzyl alcohol. The translation level is controlled by a cis element, crRNA, which will form a hairpin structure that can enfold the RBS sequence upstream of the synthetase genes, thus inhibiting the initiation of the translation. The taRNA accumulated in the memory module will play a role as a trigger. taRNA can trans-regulate the initiation of the translation by remove the hairpin structure formed by crRNA, resulting in the expose of RBS sequence which is the crucial sequence of translation initiation. [2, 9] (Figure 9) The design of this circuit was advised by the AND Gate Model described in the model page, which suggested us take taRNA as the accumulated substances rather than crRNA.

To verify whether this AND gate can work, we design two circuits below (Figure 10):

Figure 10. Verification of the reproduction module.

On account of this design, we can achieve the goal to control whether the reproduction module will be initiated only in those bacterial cells that have memorized benzyl alcohol.


Many approaches have been made to achieve mass-production of aromatic compounds in engineered E. coli such as mandelate, vanillin and benzyl alcohol [3,10,11]. The shikimate pathway is the main pathway that synthesize aromatic amino acid including phenylalanine, tyrosine and tryptophan.

To synthesize benzyl alcohol in E. coli, we need to expand the shikimate pathway from an intermediate named phenylpyruvate. We transform a plasmid including three genes, vcm17, mdlB and mdlC into E. coli . vcm17 is originally taken from Amycolatopsis keratiniphila HCCB10007. It decarboxylates phenylpyruvate to form (S)-mandelate. mdlB and mdlC are obtained from Pseudomonas putida ATCC12633. MdlB dehydrogenates (S)-mandelate to form phenylglyoxylate. MdlC decarboxylates phenylglyoxylate to form benzaldehyde [3]. With the help of endogenous alcohol dehydrogenase (ADH), benzaldehyde will be reduced to benzyl alcohol (Figure 11). 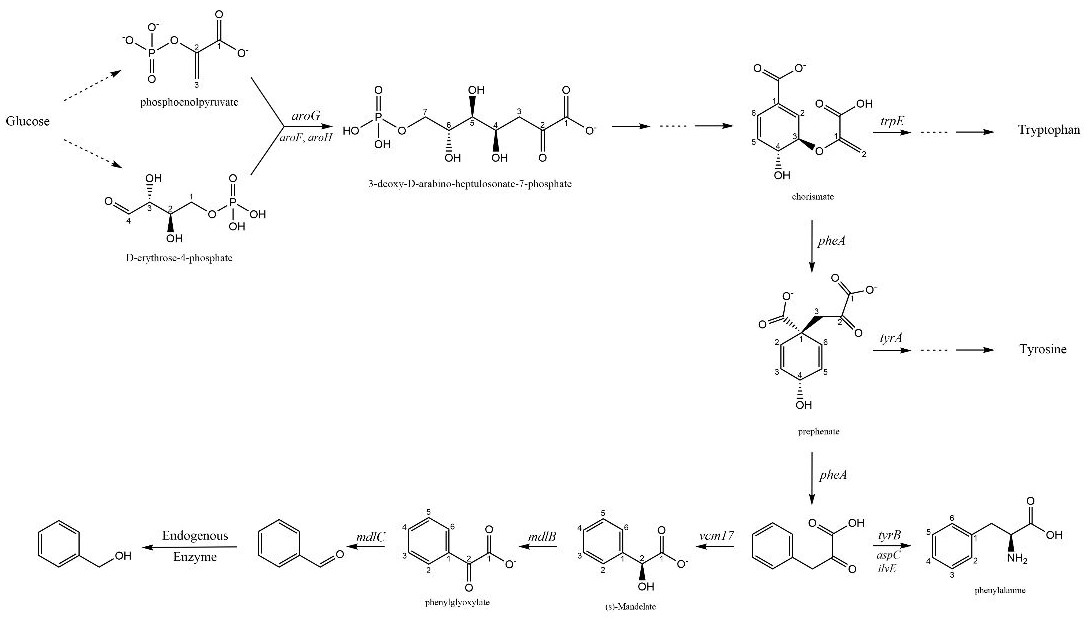 Multiple approaches have been made to optimize this pathway. One of them is the deletions of tyrA, tyrB, trpE and aspC to reduce the consumption of the metabolic fluxes in the synthesis of amino acid. Another one is the transformation of two mutant genes aroFfbr and phe fbr which can remove the production inhibition comparing to the original aroF and pheA [10]. This approach is also verified by the Metabolic Model described in the model page.

Based on these facts, we design the benzyl alcohol production circuit as the diagram shows. The chassis we use is E. coli W3110 BCAE (W3110 ΔtyrB::FRT, ΔaspC::FRT, tyrA16::Tn10, ΔtrpE::FRT) within pSUFAAQ (pSU2718 derivative, aroFfbr, phe fbr, lacIq, hmaSAo) which is generously provided by Zhoutong Sun and Sheng Yang from CAS Center for Excellence in Molecular Plant Sciences / Institute of Plant Physiology and Ecology [10]. To make the bacteria grow normally, at least three amino acids should be supplemented into the culture medium, including L-tyrosine, L-tryptophan and L-aspartic acid. The supplementation of these amino acids was advised by the Metabolic Model described in the model page.


The erasure module is such a simple module that only includes a tet promoter regulated by TetR and an enzyme gene called aiio (Figure 12). AiiO is an acylase which can hydrolyze the amide bound of AHL. AiiO has a spectrum of substrates from C4-HSL to C14-HSL, including C6-HSL used in our project. Noted that AHL and C6-HSL are synonymous in our project. The advantage of AiiO is that the hydrolysate is irreversible which means that they cannot synthesize again [4].

After AHL has been hydrolyzed, the positive feedback established by the memory module will be terminated. Without the reinforcement of luxPR promoter, taRNA will be degraded by endogenous RNase. Then, the memory of the bacterium will be erased. Even if we added IPTG into the media, it will not produce benzyl alcohol anymore.

To test whether the erasure module works, we designed a circuit below (Figure 13):

Figure 13. Verification of the erasure module.