Aptamers are short oligonucleotide sequences (DNA or RNA), which, due to their spatial conformation, are able to bind specific targets with high specificity and affinity. Aptamers exhibit unique properties that make them attractive either for clinical or laboratory use. However, the challenge is the initial identification of aptamers that bind a specific target.

Why are aptamers important?

Antibodies and aptamers share the basic property of specific and effective binding to a target molecule. Even though antibodies are more frequently used in research and clinical settings, we should note that aptamers are superior to antibodies in that they:

1. Require less time and resources to be developed and produced.
2. Are more stable than antibodies and thus can be easily transported and used in hard to reach areas.
3. Do not elicit an immune response, especially without humanization.
4. Their small size allows them to reach difficult to target organs, such as the brain, which is helpful for research and therapeutic purposes.

The name “aptamers” is attributed to a publication by A. Ellington and J.W. Szostak, who developed a process similar to SELEX concurrently with Tuerk and Gold and named their products aptamers, which originated from the Latin word “aptus” - touch or fit and the Greek word “meros” - part⁠.

Currently, the standard method for identifying new aptamers is an in vitro procedure called SELEX, which stands for Systematic Evolution of Ligands by EXponential Enrichment. The SELEX procedure is depicted below.

Even though variations of SELEX do exist they still do not overcome major limitations of this technique. First and foremost, traditional SELEX requires a lot of time (even up to 6 months) to identify an aptamer. Although, some SELEX variations have allowed for a reduction in time they end up increasing the costs. Second, both traditional SELEX and its variations require a lot of materials and expert knowledge, which increase the costs and therefore do not allow implementation of the technique by many laboratories. Third, since SELEX begins with a pool of aptamers, identifying an aptamer against a target means that the aptamer is already present in the initial pool. If such a sequence does not exist in the initial pool, SELEX fails to identify an aptamer against a target. Lastly, SELEX is done completely in vitro and uses non-physiological conditions, which can render aptamers less or non-functional in vivo.

Our team aims to tackle these problems in our project MEDEA: Machine-Enhanced Directed Evolution of Aptamers. We combine a customised computational pipeline with the power of in vivo directed evolution in order to

In the RNA world, RNA used to dominate biology. It had a dual function, operating as the genetic code and the enzymes of the first protocells simultaneously. Enzymatic RNA molecules are called ribozymes.

At the dawn of the DNA age, ribozymes may have acquired a secondary role, but they are still an important part of cell biology. Among the most important ribozymes are the following ones:

The structure of ribozymes comprises of stems, which are areas where hydrogen bonds form between complimentary RNA sequences, knots and pseudoknots. A knot is formed between two stems. The most important interactions are the ones between different stems, because these seem to stabilize the ribozyme and enhance its activity.

We have decided to implement the hammerhead ribozyme (HHRz) in the development of our selection system, because it has been thoroughly studied and, consequently, sufficient biochemical data exist. Therefore it can be regarded as the model ribozyme.

Hammerhead ribozymes can be either full-length or minimal. Minimal HHRzs are artificial and consist of fewer bases than full-length ones, however the latter possess higher catalytic efficiency because of additional stem-stem interactions, as seen in this illustration (Α,B: minimal, C,D: full length). The catalytic activity of the minimal HHRz is 1000 smaller than the full-length HHRz. [2,3]

A typical HHRz consists of three stems and two or three loop areas. These can change however, as many different types of HHRzs exist, with different configuration of the loops. The only part of the HHRz that must be conserved, in the minimal HHRz as well, is the active center of the ribozyme and the cleavage site [5]. Furthermore, modified HHRzs can be created, in order to enhance their catalytic activity [6].

Hammerhead ribozymes, and all the other ribozymes as well, can be appropriately connected with an aptamer through a communication module and thus comprise an aptazyme. Subsequently, aptazymes offer us a substitute to antibodies, since the aptamer can be designed to bind to any ligand and ribozymes are able to perform many different activities, if they are sufficiently developed. The aptazyme can either be activated or inactivated when the ligand binds to the aptamer part, depending on its design.

The aptamer part can be linked with the HHRz at any stem by inserting the communication module, which must be designed in a way that renders the aptazyme functional. At the moment the available options are through software impementation (JAWS - iGEM Heidelberg 2015 [7]) or via rational design [8]. Another possible structure has been proposed by Klauser et al., 2015 [9], in which the aptamer is inserted before the HHRz. This particular design has served as the basis for the design of our own aptazymes.

What can the different functions of the HHRz constituent be though? After the cleavage site, the HHRz can be conjugated to with an mRNA or a tRNA molecule or even a miRNA molecule - any regulatory RNA molecule is eligible. ( Examples: Wieland et al., 2009 , Klauser et al., 2015., Shang et al., 2015 ) When the HHRz part is activated, the regulatory RNA is set free and it can take up its usual role in the cell. That means that aptazymes can be extremely versatile tools in genetic engineering and synthetic biology, and we want to increase the awareness of the synthetic biology community on the vast applications that they enable.

Egged on by the previous year’s Nobel Prize in Chemistry, of course anybody would want to try their hand at Directed Evolution systems. A method chiefly used in Protein Engineering, Directed Evolution is trying to simulate Darwinian Evolution in a test tube⁠. In directed evolution, we begin with a pool of variants, we screen those, amplify the ones that better fulfill our purposes, then mutate them further, resulting in an improved variant pool. This process is repeated until a threshold is reached or a number of rounds pass. In computational terms, it is akin to a Genetic Algorithm, the one we used for our Software. The current trend is to combine computational methods to achieve better results for directed evolution. 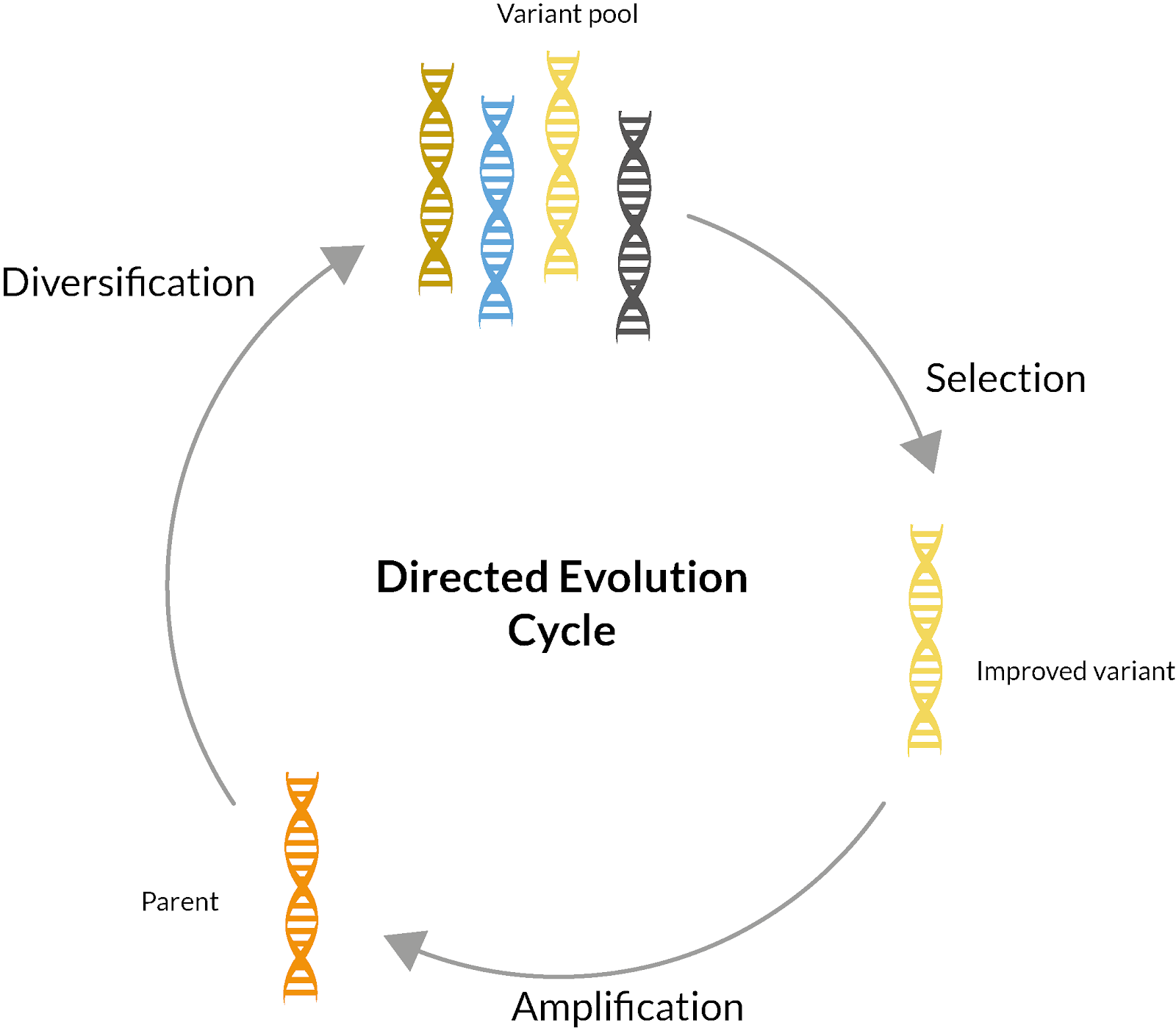 A subset of Directed Evolution based methods is continuous in vivo directed evolution, also known as adaptive laboratory evolution. In this protocol, a continuous culture is maintained and a microbial culture is maintained using a chemostat, or in our case, a morbidostat. A continuous selection pressure is applied to the bacteria, either of stable intensity of using a control-feedback loop to increase or decrease the intensity. While the less fit bacteria die off, the more fit one survive and propagate, saturating the culture with their genome. Then, a diversification agent is applied, which can be either continuous or used in discrete intervals to diversify the library. The selection pressure continuous to lead to the bacteria exhibiting the most fitness to saturate the culture. Do not worry if this sounds too complicated now, we’ll go through all the methods shortly.

Let’s discuss a little more about the mutator component. Over the years, there have been several ways to introduce mutations in bacteria, using endogenous protein expression like an error prone DNA Polymerase I15⁠ or exogenous mutagens, like chemicals or radiation16⁠. In this section, exogenous mutagenic agents will not be considered, as their effects can be very unpredictable and non-specific, their mutation rate varies and they are usually more expensive to use, owing to the need for constant inflow. We should also note that this is by no means an exhaustive list of all mutator components, but contains only the ones we mainly researched during the design of our own project, before coming across the system we employed (find out more about it in our Design page). These are: error-prone polymerase I, phage-assisted continuous evolution (PACE) and the MutaT7 system!


Error prone Polymerase I: In our knowledge, the first attempt at targeted CIVDE was made in 2003, using a DNA Polymerase I, whose fidelity was reduced by mutating the 3’ → 5’ exonuclease domain, which is needed for proofreading in the ColE1 plasmid of E. coli. This study used a two plasmid system, where one plasmid expressed the Error Prone DNA Polymerase I, henceforth EPDP1 and the other was an ColE1 plasmid with the correct Ori and the target gene, which in this case was β-Lactamase. A small schematic of the method is presented below:

Phage assisted continuous evolution (PACE): Possibly the most widely known method yet, PACE is a system developed in the Liu Lab at Harvard and has demonstrated its efficiency in many different cases. It is also the system of choice that the previous team that used CIVDE utilized (Heidelberg 2017). It is also the most complicated system discussed up to now. In PACE, two plasmids are used: A mutation plasmid, like the MP6 plasmid developed in the same lab, which increased mutagenesis rate and an accessory plasmid, which contains the protein III, a protein that mediates pilus binding and cell entry of the M13 phage (usually used for display) in E. coli. In the method, the pIII gene is deleted off the phage and since it is needed for phage packaging, only bacteria which have increased pIII expression to the utmost level let the phage perform its packaging. Of course, the system does not end there. The selection phage carries an E. coli gene, like RNA Polymerase. Overall, the system broadly works as follows: If the phage that first infects the bacterial cell can induce pIII expression with its RNA polymerase, it can then be repackaged and that phage genome is maintained in the continuous culture, so the expression of pIII is linked with the evolving gene. A simplified diagram of the method is presented below:

The MutaT7 system: This specific system is quite simplistic in concept, but incredibly effective. It is based on fusing a cytidine deaminase (rApo1), an enzyme which removes amine groups from cytosines in DNA, resulting in the creation of Uracils, which are not tolerated on DNA, with a T7 DNA polymerase, specifically on its N terminal. The use of the T7 polymerase is extremely important, as it facilitates targeted mutagenesis, by using a T7 promoter upstream of the gene that is of interest. It is also a monomeric polymerase, which makes it small in size and has high promoter affinity, as well as specificity, so off target effects are very much reduced. Due to its high processivity, mutations are also observed even kilobases downstream of the promoter.