Creating a method for the directed evolution of aptamers was challenging by all aspects, yet truly exciting! Our system works loosely as follows:
1. First, we use an aptamer created by our Dry Lab pipeline (MPDR) as a starting point.

2. Using either our UCM (Universal Communication Module) or another established method[automated physics model], we fuse the aptamer to a Type III Hammerhead ribozyme, which is itself conjugated with a STAR RNA. That construct is named the Aptamer Binding Cassette (ABC).

3. We use a Golden Gate protocol to assemble a plasmid which expresses:
- the protein we wish to develop an aptamer against,
- the Aptamer Binding Cassette (ABC) – changeable depending on protein,
- a polycistronic mRNA that codes for Kanamycin resistance (KanR) and Spectromycin resistance (SmR) – constant,
- the directed evolution system of our choice; in our case, this is a Cas9-based or Cpf1/Cas12-based system (2 versions)
- the guide RNA (gRNA) necessary to lead the directed evolution system to the DNA sequence we wish to evolve "genetically"

4. We transform the plasmid in competent E. coli cells.

5. We innoculate a culture and place it in the morbidostat.

6. Depending on the model’s results, we keep the continuous culture going for as long as needed.

7. We extract a sample of the continuous culture, isolate plasmid DNA and sequence it.

Our genetic circuit is depicted below. Click on the side buttons to find detailed information about our circuit’s functional modules!

This is our system of choice and to our knowledge, the newest one. The design here is quite novel. First, mutations are introduced in a Cas9 protein that inhibit either its HNH or its RuvC domain (see subsection CRISPR and its modifications). By inhibiting only one of those two domains, the Cas9 protein turns into a nickase, which causes a single strand break. Subsequently, mutations are introduced in a DNA Polymerase I to reduce its fidelity and then that polymerase is fused to the Cas9 protein on its N terminus. Using a gRNA targeted upstream or downstream of the gene of interest, targeted mutagenesis is achieved by leveraging the low fidelity of the Polymerase, depending on how many fidelity reducing mutations have been introduced (the base paper mentions 3 or 5).

The system is extremely tunable, as the mutation window is dependent on the DNA polymerase’ s processivity (in the seminal paper, DNA Pol I and Phi29 (more processive) have been used). In order to further tune the processivity, more mutations can be incorporated in the polymerases, or they can be themselves fused with other protein domains, such as the thioredoxin binding domain, which has been shown to increase processivity. The mutation rate can also be tuned using mutations and the directionality is influenced by which domain of Cas9 is perturbed. Furthermore, mutations can be introduced in the Cas protein to reduce off target effects, so as to minimize the probability that the phenotype observed is based on a mutation in some other gene.

Lastly, even the Cas protein is subject to change. For our project, we have used two variants, a Cas9 one (Base EvolvR) and Cpf1/Cas12 (CIDER). CIDER (Cpf1-based in vivo directed evolution revolver) is a novel in vivo mutagenesis system based on EvolvR. EvolvR uses a Cas9 nickase, which recognises a PAM sequence downstream of the target sequence. This leads to problems during continuous in vivo directed evolution, because mutations in the PAM will lead to no further editing of the region of interest. We have exchanged Cas9 nickase with a Cpf1 nickase. Cpf1 recognises a PAM upstream of the target sequence and therefore it is not possible to mutate the PAM. This leads to truly continuous evolution of the same locus. To our knowledge, we are the first team to use this system in iGEM and the first team to attempt continuous in-vivo directed evolution in aptamers and in RNA in general. Once more, antibiotic resistance was used as a proof of principle for this system. A schematic of the method is provided below, taken from the seminal paper on the subject: 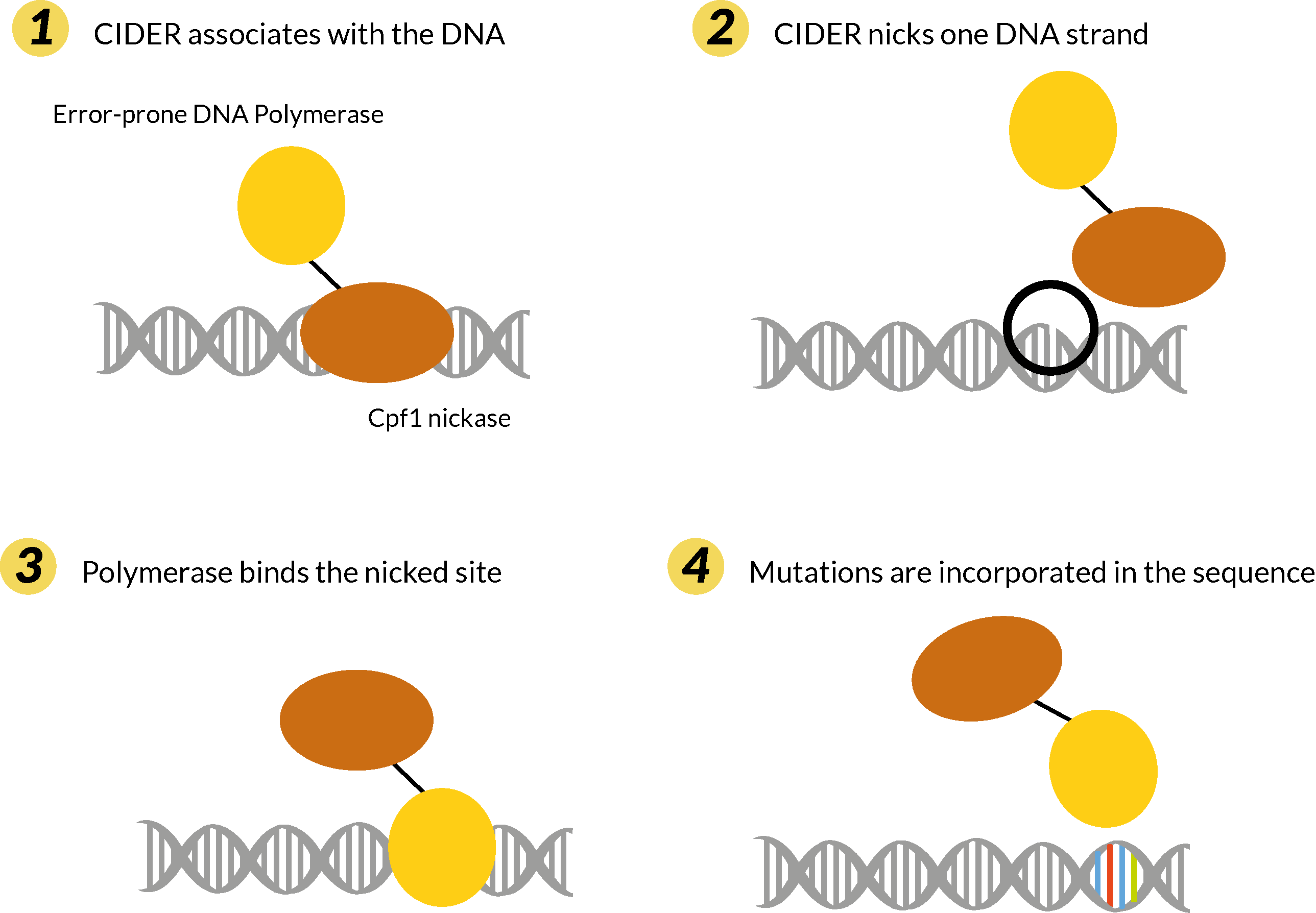 The Aptamer Binding Cassette (ABC) is a part of our system that allows for the interchangeable incorporation of aptamer sequences within a vector, especially of our vector designed for in vivo directed evolution of aptamers. The aptamer sequence can be incorporated using two restriction enzymes, KpnI and SexAI. The aptamer is combined with a hammerhead ribozyme (HHRz) to create an aptazyme. The STAR sequence upstream of the aptazyme will play an important role in coupling successful evolution of the aptamer sequence with the expression of the antibiotic cassette. Read on to find out how!

In our effort to get an aptazyme with the exact characteristics we needed, we developed a novel aptazyme design. In the figure below, it is possible to compare our design with the design currently used in the literature. 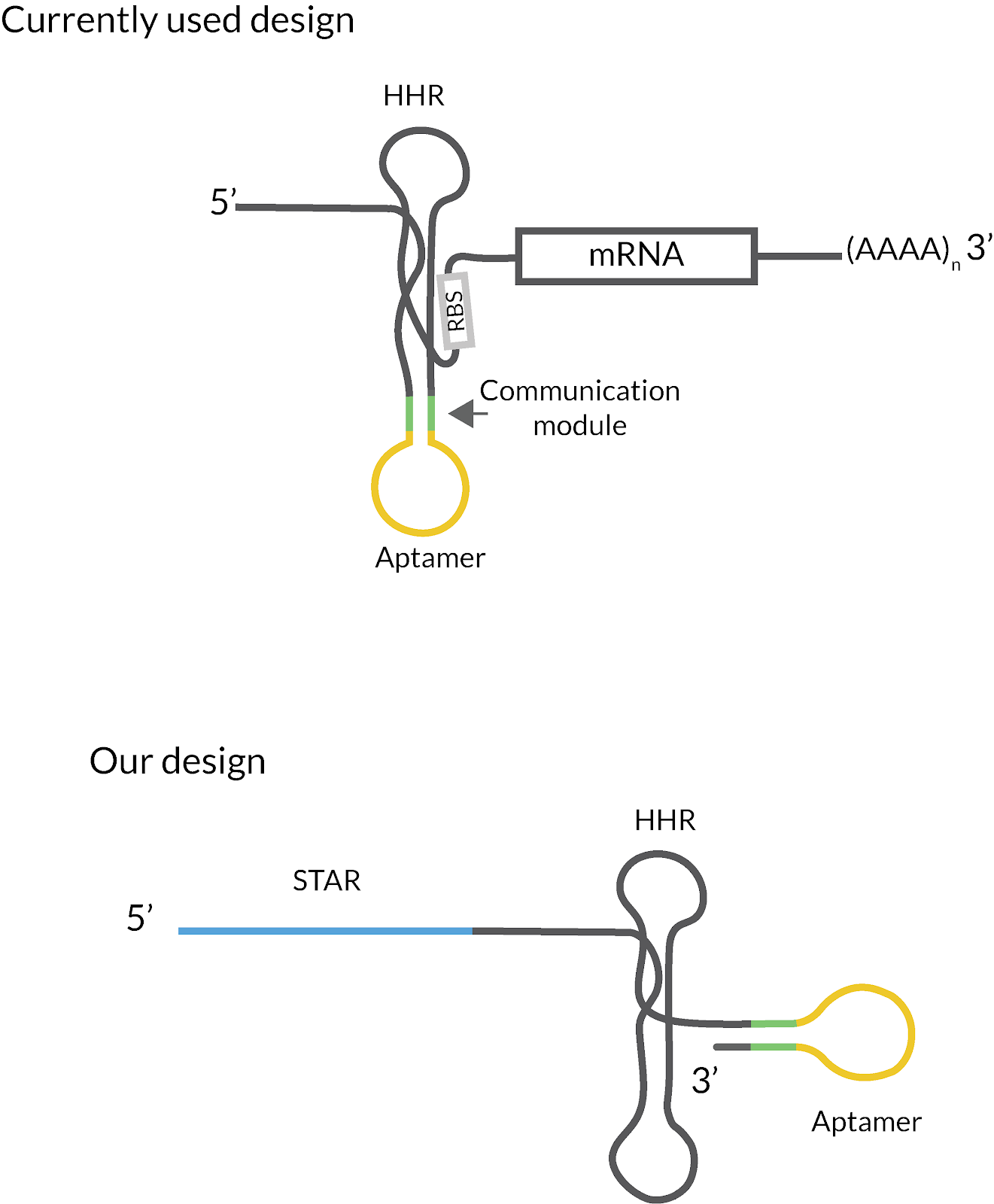 The currently used design incorporates a self-cleaving ribozyme, such as the hammerhead ribozyme (HHRz), into which the ribosome binding site (RBS) is hidden and therefore translation of the downstream mRNA (such as that of a reporter, e.g. GFP, RFP) cannot be initiated. The hammerhead ribozyme catalyses its own cleavage, but the presence of the communication module does not permit this catalysis since the ribozyme’s active site is displaced. When the aptamer binds its ligand, it causes displacement of the communication module and thus allows the HHR to be autocatalyzed, allowing for translation of the mRNA since the RBS is free.

In our design, we aim to move past the incorporation of aptamers (and aptazymes) into mRNA molecules. We decided to propose this novel design due to several reasons, which are explained below.

First, the currently used design restricts the conformations the aptamer is allowed to maintain, because it does not allow free movement of the aptamer. This is of high importance in the case of protein aptamers, because many such molecules interact with the surface of the protein. Therefore, we sought to address this issue by moving the aptamer towards the 3’ end to allow for its free movement.

Third, in our design we sought to incorporate other functional RNA molecules, such as a small-transcription activating RNA (STAR). Such functional RNAs can act as the reporters or to initiate a molecular cascade once the aptamer has bound its target. Read on to find out how STARs play a crucial role in our system’s selection module!

A fix in our STARs

A big hurdle during our project’s theoretical design was figuring out a way to translate the increase of aptamer binding affinity to an increase in evolutionary fitness. After settling in on using antibiotics as a means of selection pressure, we were using the following schematic in our heads.

We considered various models to deal with this conundrum, like using a bacterial toxin that would kill the cell in high concentrations or auxotrophies needed for the survival of the bacteria.

Because of the communication module’ s location in this specific design, we would have had problems with its implementation, as our mutation window using EvolvR or CIDER might be stringent, but it is not so stringent as to not allow any mutations outside of the window, they just happen at a much reduced frequency. As such, we had to opt against this design and were back on the drawing board. That’s when one of our members stumbled upon iGEM Imperial College London’s team in 2016 and their work using Small Transcription Activated RNAs (STARs)! 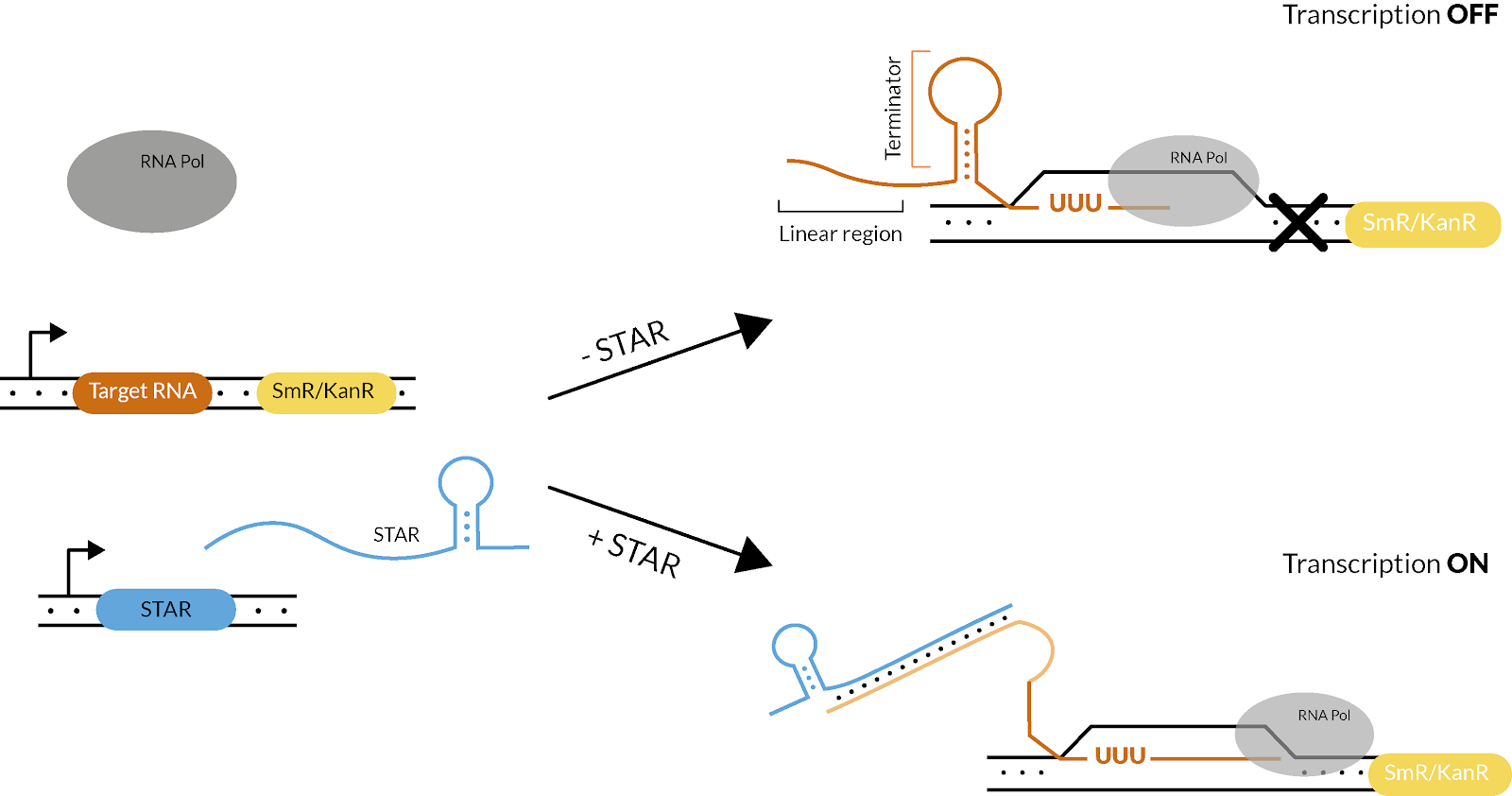 This setup is ideal for our system, since we are using a self-cleaving aptazyme. In our design, the aptamer binding its ligand leads to activation of the ribozyme, which in turn leads to an increase in STAR concentration in the cell. STAR then binds to the STAR target sequence and allows the expression of two genes which encode resistance to tetracycline and kanamycin. The utilization of antibiotic resistance genes, instead of other selection methods e.g. a killswitch, allows us to adjust the stringency of the evolution pressure. The increase in antibiotic resistance in a cell means greater evolutionary fitness. For this system, we chose the STAR Variant 19, which was shown to have high Fold Change between the Off and On states in the relevant publication.

Of course, no cellular process is completely binary and we have done our best to account for fluctuations in expression and how those can affect our system. For more details, go to our Modeling page.