As demonstrated by the previous paragraphs, our core project involves both a dry and a wet lab part. We present the results below, with respect to safety and security regulations, as well as considering the feedback we collected during our human practices work. Furthermore, you can fid the results of our side projects, namely the creation of an accessible Morbidostat, and development of a terminator efficiency measurement plasmid, CHEAT-E.

Development of the MEDEA plasmid, pEKATI

As you can read in our Design page, after an extensive literature search, and consultation of researchers from around the globe, we finally decided on the components of our system. What still remained though was the assembly method. Considering the number of different parts, as well as the efficiency of different techniques, we opted for the Golden Gate assembly method. Using the NEB Golden Gate Assembly Tool v.1.0, we designed restriction enzyme (BsaI in our case) cut sites complementary to each other, so that our system would only be assembled in one possible way. Our final product, pEKATI, can be seen below. A variant named pCIRCE was developed, containing the CIDER sytem instead of the EvolvR one. 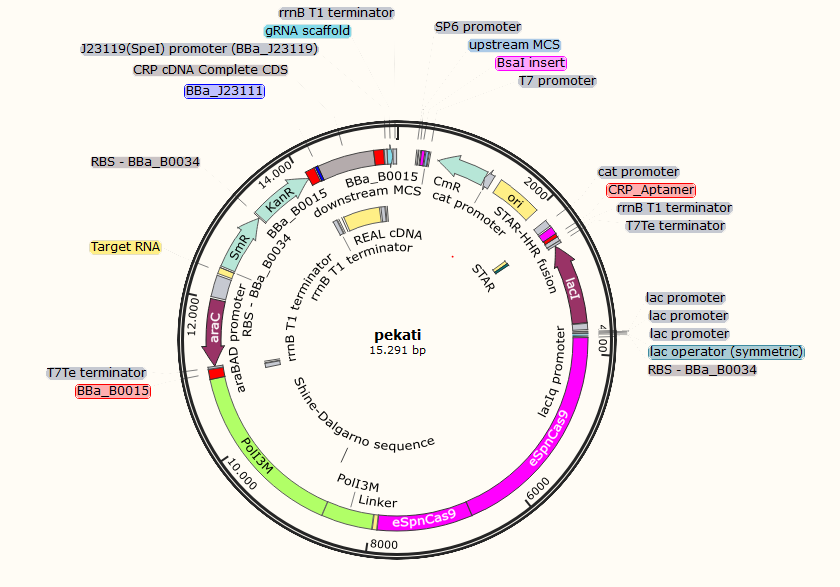 This plasmid was expected, due to its large size (~12kb) to have an extremely low copy number. This characteristic is of particular importance, as, ideally, each cell should only carry one different plasmid, and thus, only one aptamer sequence which would enable it to survive after each selection step.

We will now present our results regarding the modules of our system.

Our Aptamer Basic Cassette module consists of a hammerhead ribozyme connected to a STAR molecule. There are two specific restriction enzyme sites, for the KpnI and SexAI enzyme, that enable us to add any synthesized aptamer sequence in our cassette. Of great importance to the function of the cassette is the evaluation of the hammerhead activity. We therefore synthesized:

1. an original Type I HHRz (HHR Original)
2. a Type I HHRz connected to a STAR molecule (STAR-HHR)
3. a modified Type I HHRz so that it contains a Cpf1 TTTN site (Cpf1-compatible HHR) and
4. an inactive Type I HHRz, bearing a mutation in its active center

We first analyzed the structure of molecules A - C, so that we could detect any stereotactic differences introduced by our modifications, using the RNAfold and RNACompose software. 3D visualizations were possible through the UCSF Chimera software.

(Figure 2: 2D plane of the structure of molecules A-C using RNAfold. The active center was conserved in all cases) 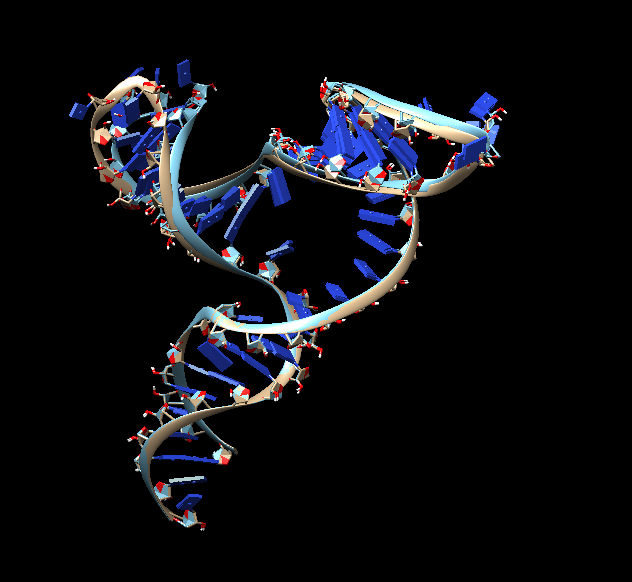 We designed the sequences to have a T7 promoter and terminator, needed for the in vitro transcription. Then, after in vitro transcription of the above mentioned sequences took place overnight, we performed an in vitro hammerhead activation assay using MgCl2, which induces hammerhead activation and self-cleavage. The results were assessed using PAGE electrophoresis and they were as expected. 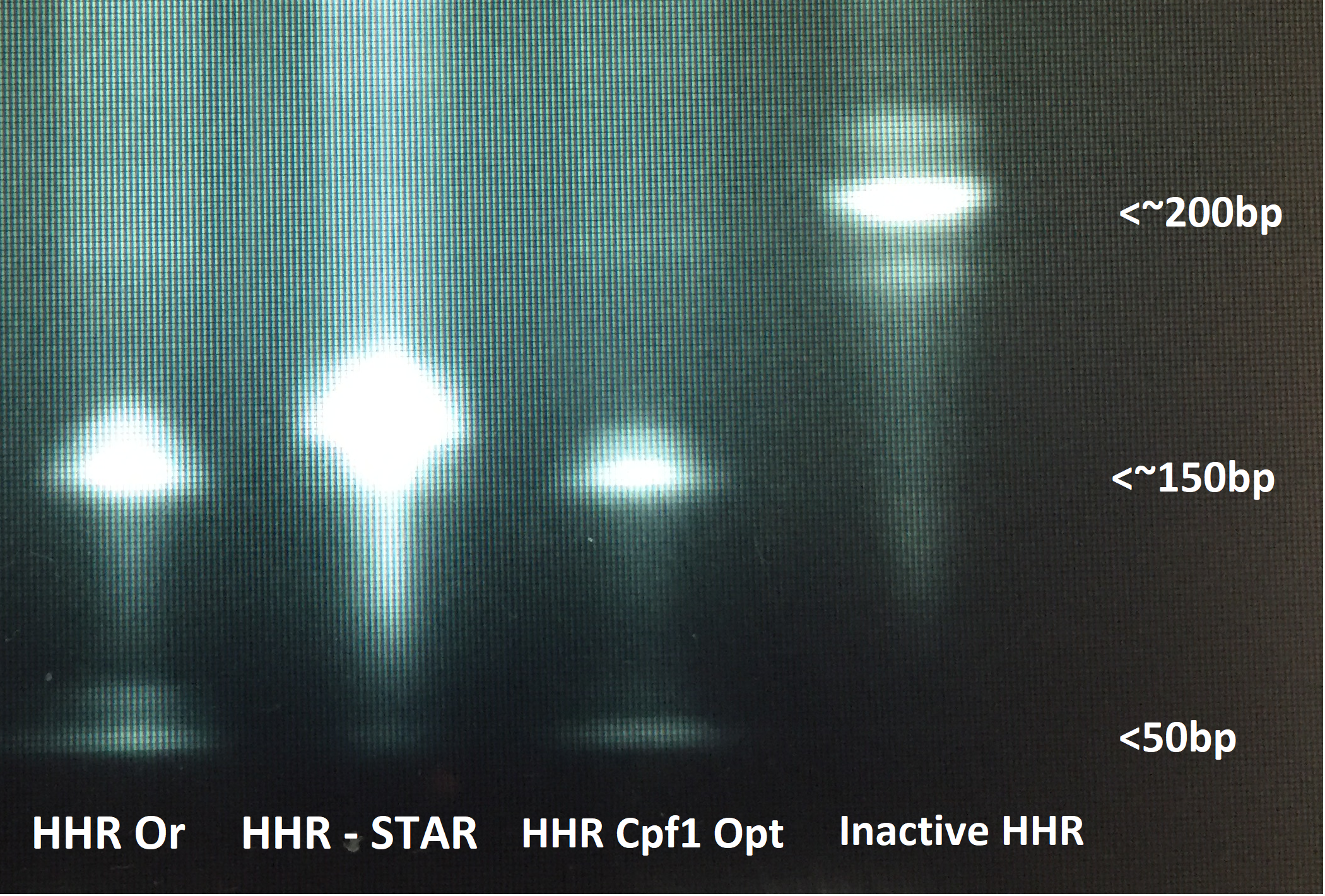 (Figure 4: PAGE electrophoresis of our synthesized hammerheads. The bands are longer because of the addition of the T7 terminator sequences, which are about 130 bp long. The only non self-cleaved HHRz is the inactive one, which is evident by the single band at ~200 bases.)

As discussed in the Improved Part Page, we redesigned the STAR molecule so that it could better fit the needs of our system, by connecting it to the HHR molecule and modifying some bases. You can find more on our Improved Part page.

Integrated HP Point: The directed evolution mechanism EvolvR was chosen after consulting Dr Badran in consideration with a safe and modular targeted evolution method. EvolvR (and our proposal, CIDER), can be modified to apply mutations upon any sequence of choice, without the danger of random mutagenesis across the chassis genome.

The pEvolvR plasmid as described by Halperin et al. [1] was ordered by Addgene in a bacterial swab, and cultures of the bacteria in agar plates containing CAM proved successful. Furthermore, miniprep of the pEvolvR plasmids was also

Our aim was to isolate both the EvolvR mechanism in its entirety as well as the PolI3M error-prone polymerase as a part of our CIDER mechanism. To acquire them, we designed the following primers with overhangs containing both BioBrick and TypeIIS (BsaI - in blue) restriction sites.

By implementing long range PCR and nested PCR protocols, we managed to isolate only the PolI3M coding sequence.This was gel extracted and used for the assembly of the proof-of-concept pCIRCE plasmid, presented on the Demonstrate page. 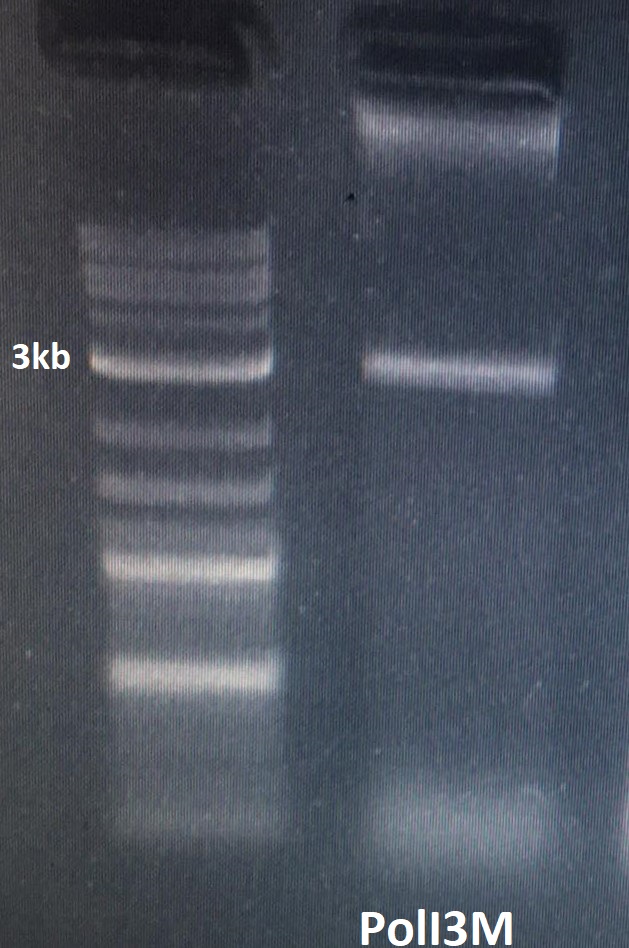 (Figure 6: Isolated PolI3M coding sequence after a nested PCR. The band has the expected size ~3.5kb.)

Our selection comprises of two antibiotic resistance coding sequences, aadA and KanR, organized in the form of an operon, which is activated by an PBad and STAR Target AND gate. We managed to assess the function of the operon after the full pCIRCE was constructed (for more on this, see Demonstrate page).

We cultured the bacteria that were transformed with the plasmid in liquid cultures with different concentrations of Streptomycin, Kanamycin and Arabinose. As the aptamer that was implemented in the mechanism has already been shown to be active in the literature, the system was supposed to work and the cells to survive. Therefore, these results prove that our antibiotic cassette is a functional part. 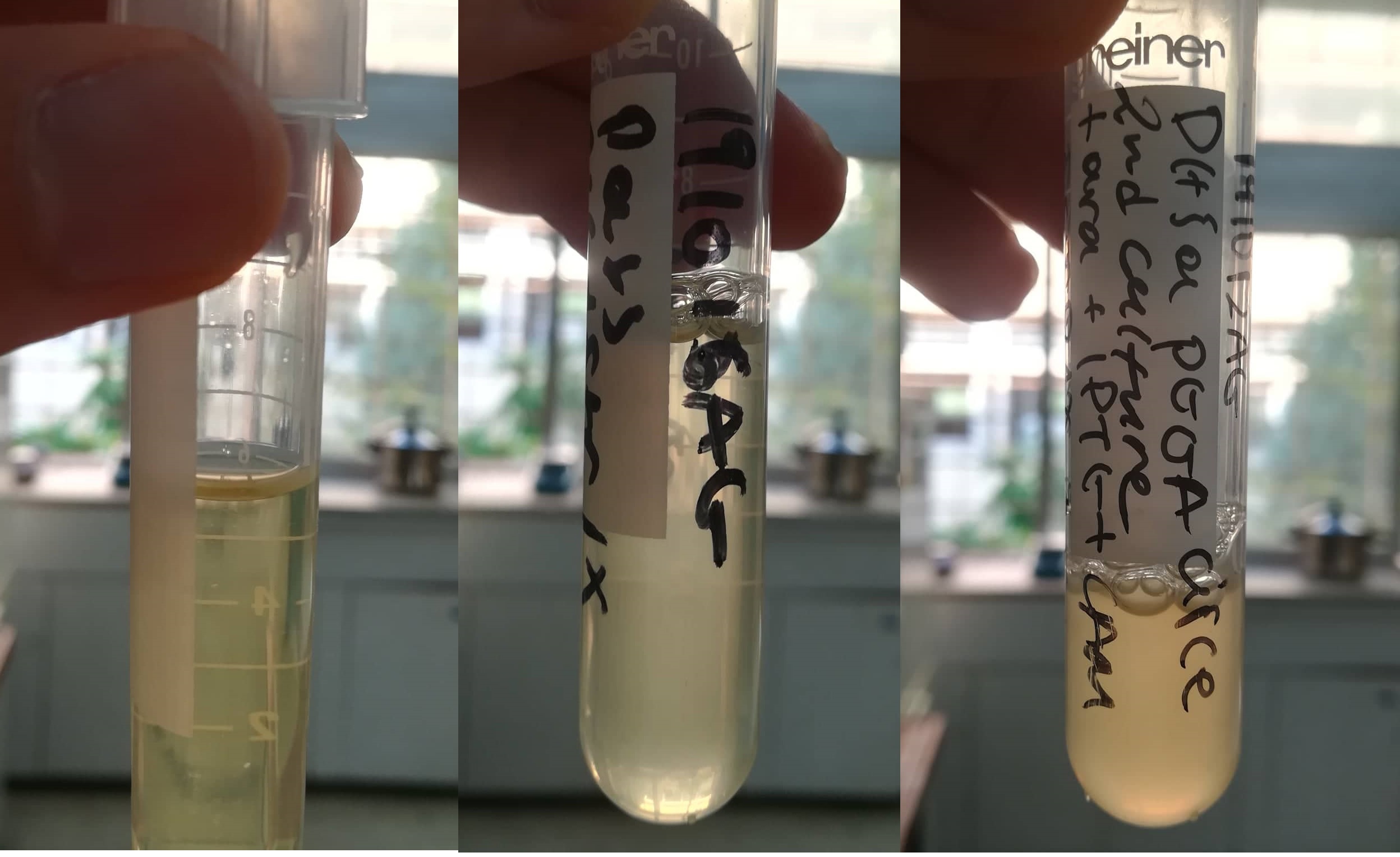 Integrated HP Point: At first we were thinking of making use of bacteriotoxins, however, these do not offer the user the chance to place a desired threshold for aptamer binding affinity. We were advised both by Dr Stathopoulos and Dr Badran to use antibiotics, which can be acquired easily and their concentration is adjustable. This features enhances the accessibility of our project but also increases the need for safety standards, due to the ever increasing antibiotic resistance.

Our modelling took place in parallel to the creation of our system, therefore it offered us an insight on the inner workings of our mechanism. Using the actual parameters from the genetic parts that we designed, we managed to calculate the steady-state of the system, and, more importantly, the correlation between aptamer binding affinity and our cells’ survival potential, meaning, the production of antibiotic resistance molecules. This proved to be not as sensitive as we expected. Consequently, our system at the present state can evolve aptamers up to Kd = ~ 10 ^ -8.5.

(Figure 8: The correlation between Kd and antibiotic resistance molecules production for our present system design.)

The model yielded significant results, which enabled us to understand how to optimize our system in the future. The proposal of the model was to use less efficient promoters for ligand and aptazyme production than the ones we implemented in our system. You can read more about it in the Model page.

Our project is far from over. Even though we may have assembled a prototype of our plasmid (see our Demonstrate page), our time during iGEM was certainly not enough to fully validate a project of our scope. Therefore, our after-iGEM plans include the following:

- Use our Modelling results to enhance the sensitivity of our mechanism for optimized aptamer binding affinities.
- Validate that the Aptamer Basic Cassette can be used as a modular platform for synthesized aptamer sequence addition.
- Measure the effectiveness of different aptazyme communication modules in order to develop a Universal Communication Module.
- Test the directed mutagenesis results by sequencing isolated plasmids from our liquid cultures.
- Create a Model of the directed mutagenesis module function.
- Create a Community Lab after taking into account all necessary safety and security precautions.