This year, as part of our team’s criteria for the bronze medal, we decided to run a side project that deals with the characterization of terminators and the measurement of their efficiency. As their name perfectly implies, terminators are the genetic functional units that act by terminating the DNA transcription process. Both in Nature and in Synthetic Biology, this innate function of terminators is very useful as it helps define one transcriptional unit from the other and prevents the transcription of the genome past the end of a gene sequence, which would pointlessly use up the cell’s resources.

As terminators can be (pretty) “leaky”, in other words, fail to end transcription, it is vital to have solid information regarding their efficiency, especially for researchers who make us of this genetic toolbox.

How do I measure a terminator’s efficiency? – The current method

A very common way to evaluate a terminator’s efficiency relies on measuring the relative fluorescence of GFP and RFP expressed as parts of the following general synthetic biological circuit:

The efficiency is a function of the ratio GFP/RFP . The lower the ratio, the stronger the terminator and vice versa.

Drawbacks: The need of special equipment (e.g. FACS) and special training of personnel in order to measure the fluorescence.

What we propose – the CHEAT-E method

Inspired by the general principles of the aforementioned design, namely the use of two genes with measurable products upstream and downstream the terminator sequence, we came up with a novel design proposal, which will be described in this section. Ladies. Gentlemen, fellow scientists, we introduce to you the CHEAT-E method (CHeap Experimental Assessment of Terminator Efficiency)! Instead of utilizing the RFP and GFP genes, we opted for the genes tetA and LacZ, which give the cell the following characteristics: resistance to the antibiotic tetracycline and color change of colonies from white to blue, when grown on LB plates containing X-gal, respectively. The general design is presented below:

In our approach, the terminator’s efficiency will be associated with the ratio of the number of blue colonies to the number of white colonies, (No/blue)(No/white) ,of the total of colonies grown on LB plates containing tetracycline and X-gal!

Advantages or Why CHEAT-E rocks!

Compared to the classic method, CHEAT-E suggests a simpler, easier, cheaper and more direct way to evaluate a terminator’s efficiency! Rather than requiring costly equipment and special training, our method allows for faster evaluation of terminators that can be performed by anyone, with only basic lab supplies and equipment.

When designing our first plasmid to test our idea, we decided to use BioBricks from the 2019 iGEM Distribution Kit, as we wanted to create something plausible and readily available to all other iGEM teams and researchers working with BioBricks! Below, you will find a list of the BioBricks you used: 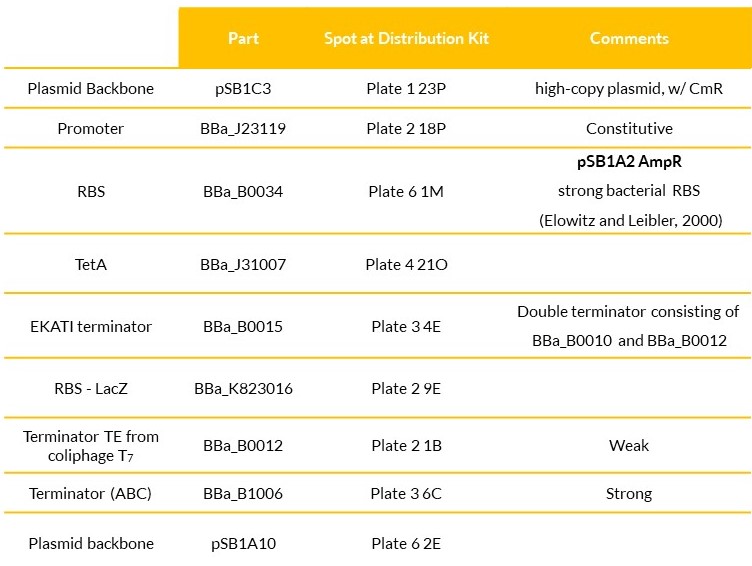 We chose to measure the efficiencies of terminators BBa_B0012, BBa_B0015 and BBa_B1006. These parts are important BioBricks, commonly used in Synthetic Biology. Terminator BBa_B0012 is weak, while terminator BBa_B1006 is a strong one. What’s more, we have included part BBa_B0015 into our main project’s design (link). Also, we deliberately opted for terminators that have already been characterised, so as to have available data to compare our new method’s results to.

As for the classical approach of carrying out the measurements, we ligated the terminators to the pSB1AO with Standard Assembly. the plasmids were transformed into competent DH5a E. coli cells, which were spread onto agar plates containing Ampicillin and were left to incubate at 37C. Successful ligation was confirmed with colony PCR. A control plasmid containing only the GFP and RFP genes, was constructed with Standard Assembly, too. We measured the expression of GFP and RFP after one and two days of incubation. This procedure was done with FACS and the results are presented later on.

As for the pCHEAT-E (and its control plasmid), we tried to construct it with the BioBrick Standard Assembly method, too. After each Assembly, we performed colony PCR to make sure the procedure was successful. However, we were not able to create the final construct, as we specifically faced issues with the last step of the Assembly process. We have made some assumptions on why this could have happened (e.g. low efficiency of Standard Assembly when larger parts are involved, issues concerning the efficiency of the digestion and/or ligation process - yet we made efforts to optimize these steps). As we realized that creating this plasmid from scratch can be more difficult than it should, we decided to design a modular pCHEAT-E...

We believe that our approach proposes a solid alternative to the classic measurement method and we wish for it to be used on a wider scale for quick qualitative and quantitative characterization of terminators. In this context, we designed a standard modular CHEAT-E plasmid backbone, in accordance with the design presented above. In the CHEAT-E backbone, we have introduced the BioBrick prefix and suffix between the tetA and LacZ genes (all other EcoRI, XbaI, PstI and SpeI recognition sites have been abolished). In this way, we have transformed the terminator site into an interchangeable site, where one can simply introduce any BioBrick terminator with a single Standard Assembly round! 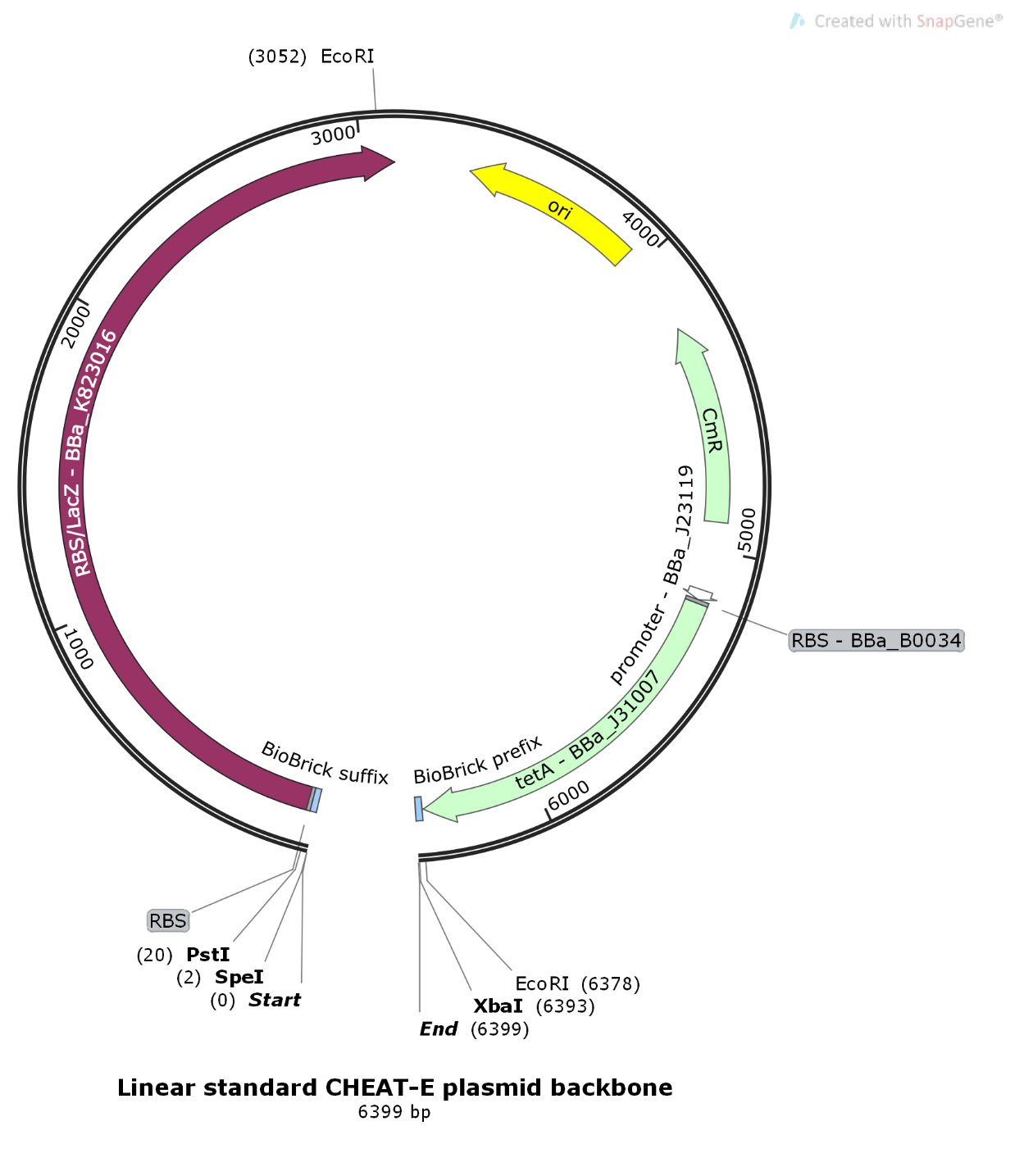 We first attempted to measure the efficiency of the terminators after 24 hours in culture. The extended protocol of the procedure is described at the end of this section. Briefly, the bacteria were grown inside a shaking incubator at 37°C at 200 RPM in 6mL cultures containing ampicillin and 0.1% arabinose. The culture was pelleted and the pellet was resuspended in 1mL of 1X PBS. From that, 10 μL were diluted in 990 mL of 1X PBS to yield approximately 5 million cells. For FACS, we used BD FACSCanto™ II. During FACS, a low flow rate was used. We used the following excitation and emission wavelengths: GFP: excitation = 488 nm, emission = 510 nm ; RFP: excitation = 488 nm, emission = 584 nm.

However, we were unable to measure GFP, even though there was a weak RFP signal. An example FACS output is shown below from bacteria carrying pSB1A10 without any terminator. 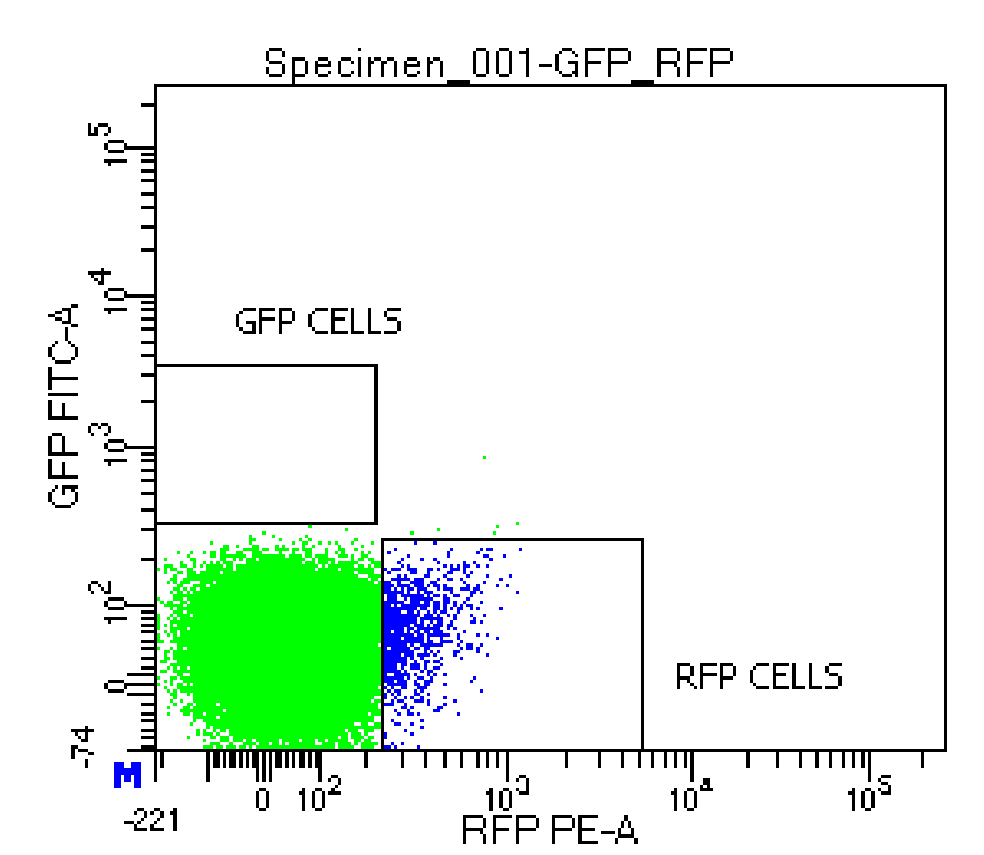 Therefore, we concluded that 24 hours of culture were not enough in order to produce the fluorescent proteins in amounts required to determine the terminator’s efficiency. For this reason, we decided to grow the bacteria under the same conditions for 48 hours. The pellet was collected as described above and the FACS was done under the exact same conditions. An example FACS output from the bacteria carrying the pSB1A10 plasmid without any terminator is shown below: 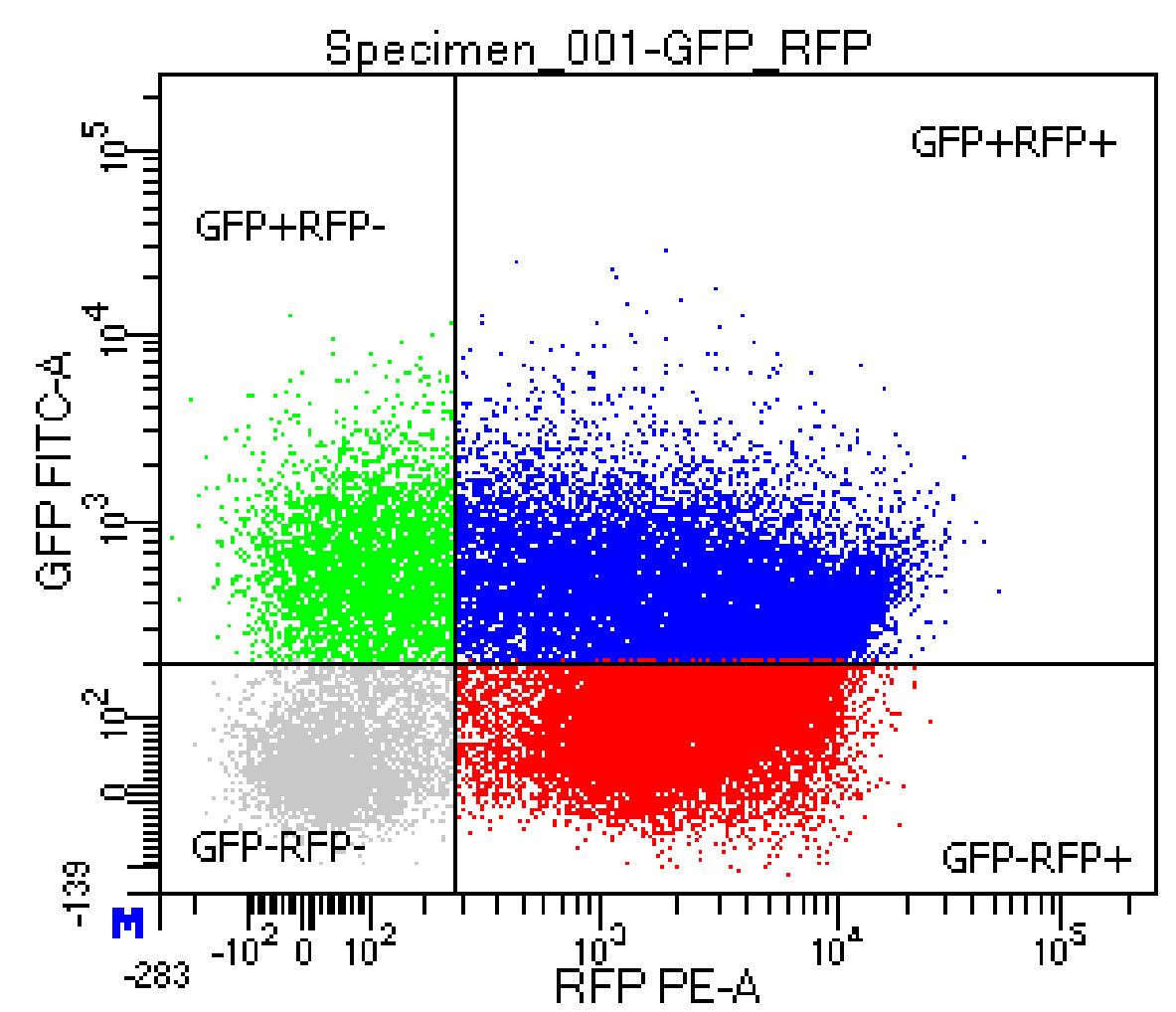 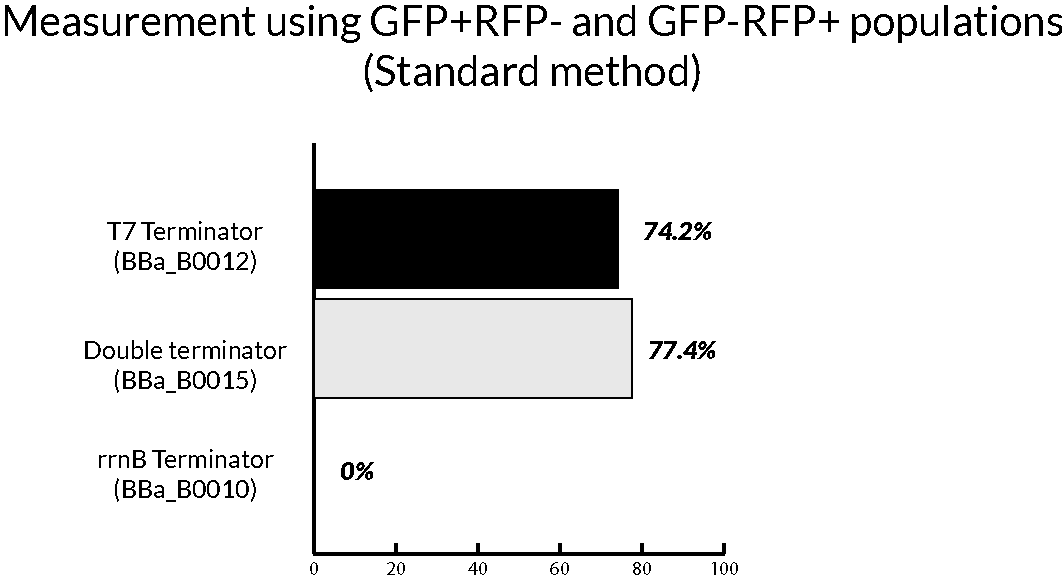 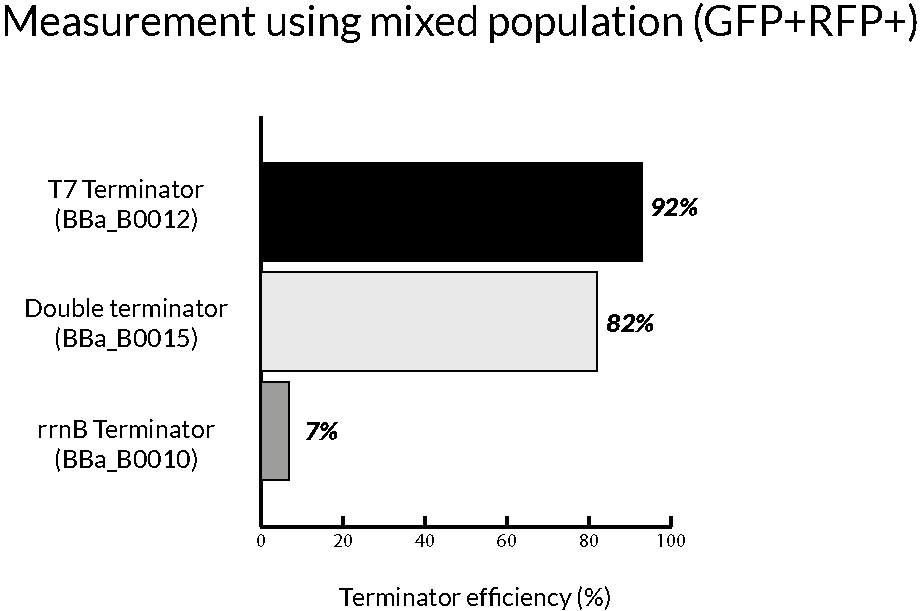 It seems that both methods produced similar results, showing that the efficiency of the T7 and the double terminator is similar.

1. Insert the terminators of interest in the pSB1A10 plasmid with Standard Assembly. We cloned the T7 Terminator (BBa_B0012), the Double Terminator (BBa_B0015), and the rrnb Terminator (BBa_B0010).
2. Transform the bacteria with the new constructs. Also, transform other bacteria carrying the RFP and GFP plasmids to be used for calibration during FACS.
3. Plate 100 μL of the bacteria transformed with the pSB1A10 plasmid on petri dishes containing ampicillin (100 µg/mL)
4. The following day pick single, isolated colonies and grow them in 6mL of LB containing ampicillin (100 µg/mL) and 0.1% arabinose.
5. Let the culture grow for at least 48 hours inside a shaking incubator at 37°C and at 200 RPM. After 48 hours the cultures will appear slightly colour depending on the efficiency of the terminator!
6. Centrifuge the culture at 3000 x g for 5 mins.
7. Discard the supernatant.
8. Resuspend the pellet in 1 mL of 1X PBS.
9. Transfer 10 μL of the suspension in 990 μL of 1X PBS inside a FACS tube to yield approximately 5 million cells. This should be done for each culture.

All measurements in the FACS should be done under low flow rate. We collected 50,000 events using the lasers for GFP and RFP of your instrument. We used BD FACSCanto™ II machine.

Find the full reports of the FACS measurements below: