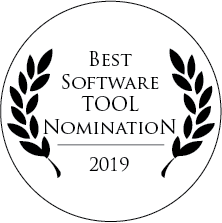 In this aspect of our project, we worked on the predictive modelling of the efficacy of toehold switches according to their dynamic range.

Our software consists of the following facets. 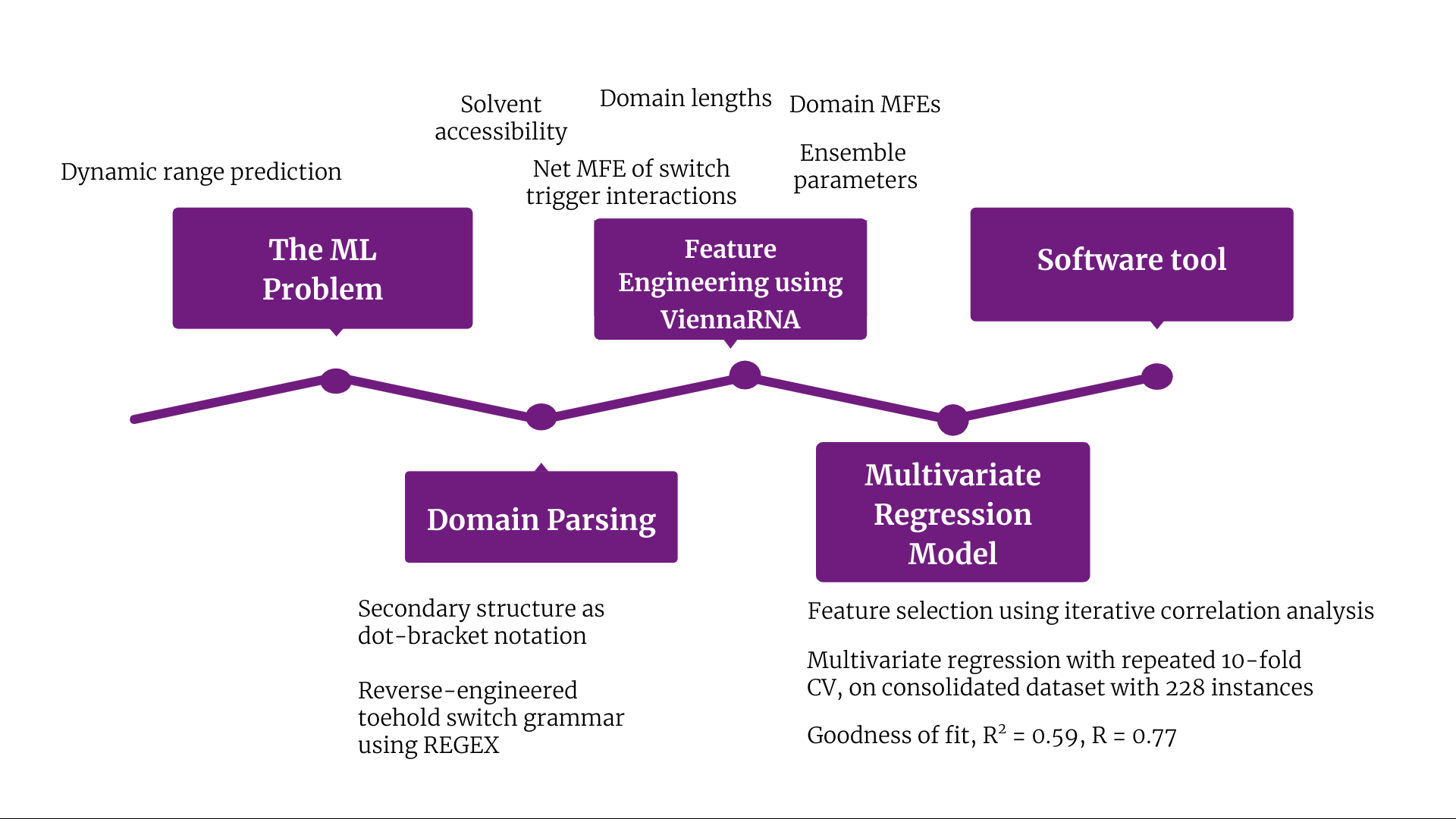 Toehold switches are de novo designed, high- performance, mRNA based riboregulators for translational regulation in prokaryotic systems. Three properties of toehold switches buttress their integration in the genome and in synthetic genetic circuits for diagnostic applications in the upcoming field of synthetic biology:

Each of the above properties of toehold switches could be characterized by well-established protocols. In the software aspect of House of Toeholds, we aimed to predictively model toehold switches as a sensory element for the detection of short RNA oligonucleotides called microRNAs that are indicative of cervical cancer. We came up with an in silico predictive modelling technique of toehold switches for candidate mRNA sequences through machine learning techniques. The machine learning problem at hand is as follows: for a given toehold construct as input, we would like to predict the efficacy of the toehold measured by its dynamic range (ON/OFF ratio). The features of interest to solve this problem could stem from sequence properties as well as structural considerations.To determine the optimal toehold switches for the problem at hand, we made use of regression analysis. The design workflow for the machine learning problem was the following:

The dot-bracket notation is a simplistic grammar for representing the secondary structure of RNA without actually visualizing a diagram. The only rules of secondary structure notation are represented in the following manner: unpaired bases by dots ‘.’ and paired bases by parentheses ‘(’ and ‘)’. Toehold switches have multiple unique domains that can be extracted by pattern matching of their dot-bracket structure. We realised that each toehold switch possesses a generic pattern of dots and brackets by virtue of their secondary structure. We wrote regular expression (REGEX) pattern matching scripts in Python and passed them to a program called RNAfold. RNAfold outputs the dot-bracket structure for an inputted sequence. It is part of the ViennaRNA suite of RNA analysis programs. We have used a number of programs from this software package to engineer most of our toehold switch features. The general grammar of the toehold switch structure is shown in the figure below. We used this as a template for our domain parsing REGEX.

However, our initial REGEX script did not parse out the exact domains of the toehold switches for all the instances in our dataset, so we analysed the dot-bracket more carefully and discovered that most of the engineered toehold switches did not adhere to this grammar. Some switches included a wobble base pair between G-U in the secondary loop containing the start codon, others had base-paired toehold domains, some even had base-paired linker regions. Wobble base pairs offered better stability in the OFF state and these forward engineered designed were, as a result, less leaky in comparison to older designs of the toehold switch. We also found that a couple of unpaired bases in the top stem of the toehold switch also resulted in an erroneous match. The unpaired bases were found near the primary loop sequence and we learned that they could easily allow the unfolding of the switch in the ON state while maintaining stability in the OFF state. As a result of our observations, we rewrote our domain parser in order to account for thoughtful new designs of toehold switches. We were able to match 228 out of 230 switches. We eliminated the exceptions because: We had written an optimal domain parsing program. The dynamic ranges of the eliminated switches were quite low and we realized that they would serve as outliers in our machine learning models and skew our linear fit.

We categorized out predicting variables, or features into sequence features involving the length and composition of domains, structural features and engineered structural features. We linked our domain parsing program to match the obtained dot-bracket sequence to the nucleotide sequence so that we could slice a full toehold switch sequence into its composite domains both by secondary structure and primary composition. This way, we did not lose any information in the secondary structure while retaining the base composition. We came up with the following sequence features:

The ViennaRNA Package is a set of standalone programs as well as a comprehensive web suite available for the prediction and analysis of RNA secondary structures. The following structural features were calculated from the ViennaRNA suite:

With the above feature set, different models based on different subsets of features were constructed. Based on the adjusted R2, the goodness of fit of the models was evaluated, and the model with the best metric was chosen. The feature matrix was generated with the dynamic range as the response variable for all 228 instances. The volume of this work deals with regressing the dynamic range measured by the ON/OFF ratio with the individual attributes present in the feature matrix. The multivariate regression model was constructed using Scikit learn, a Python library for machine learning. We used an 80-20 train-test split and cross-validated our model by 10-fold cross validation. The cross validated model metrics output an adj. R2 value = 0.59, implying an R value = 0.77. We also applied a log10 transform on our response variable to validate if the features better predict the log transformed ON/OFF ratio value. However, we obtained an optimal model without the log transformation of the ON/OFF ratio.Our model outperforms the only other existing multivariate model proposed by CUHK’s iGEM 2017, whose reported R2 value was 0.22.

Predictor variables and their coeffients of linear regression

The intercept of the model was -160.74 with a p-value of 0.067. Since the coefficient estimates are large, we thought more conservative estimates might be useful. In this regard, we performed ridge and lasso regression to detect moderation in the estimates. We also applied a ridge regression, a regularization technique to improve the final model. We found that the ridge regression did not improve the coefficients to fit the model. However, the lasso regularization technique improved the coefficient of the frequency of the MFE structure (from -327.32 to -294.23) (S.No. 5).The P values of most of our features are extremely significant (less than 0.001), and the overall model is extremely significant, given its cross-validation and robust feature selection techniques.

Visit our GitHub repo for the ML and modelling code:https://github.com/igemsoftware2019/SASTRA_Thanjavur