Interaction with Women from NGOs and SHGs 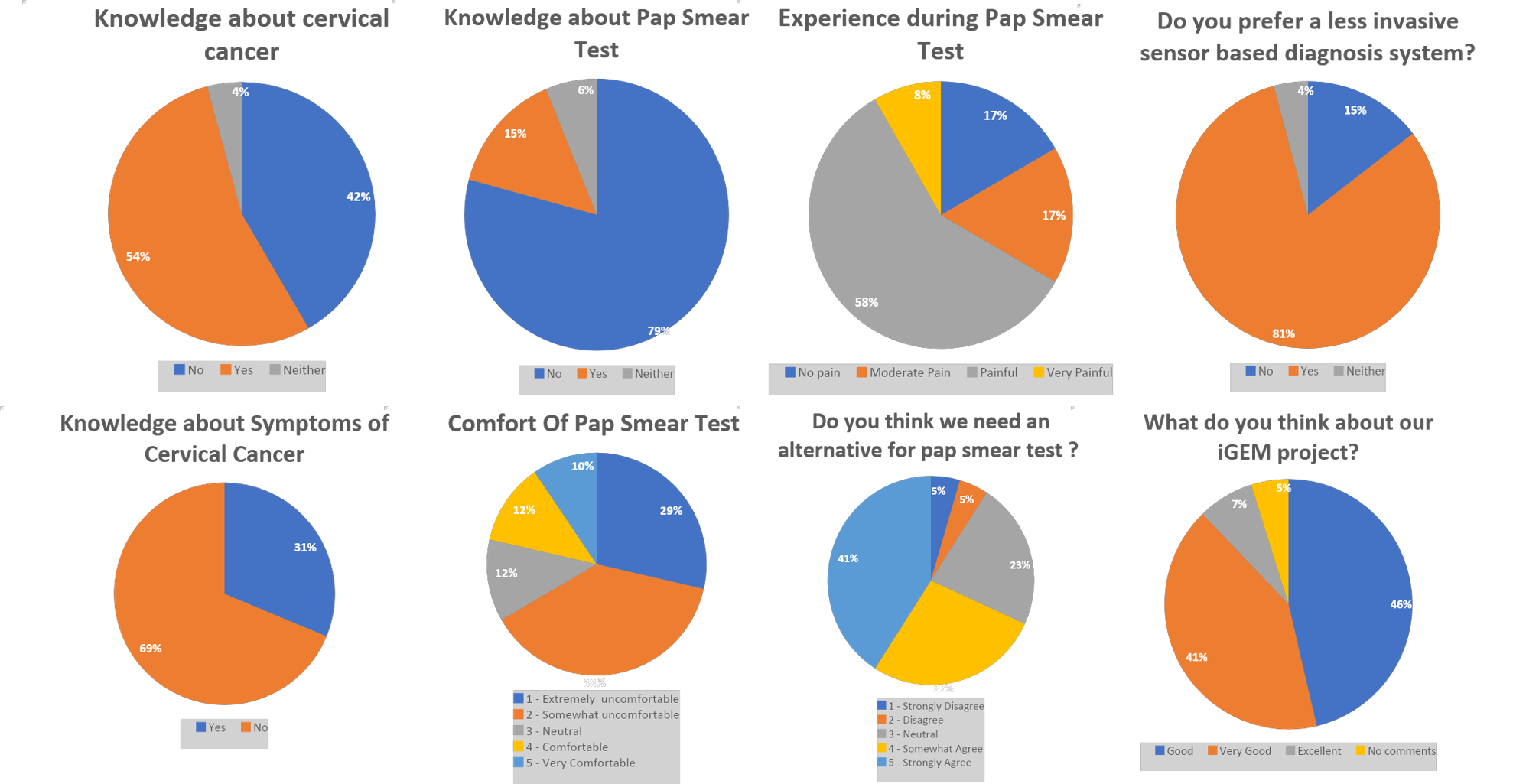 We conducted 3 such campaigns at PCVC Anna Nagar, Chennai; PCVC Choolaimedu, Chennai; Repco finance, Trichy. A total of 48 women volunteers came forward to take-up the survey and listen to our session. The data was obtained after their consent.

We understood that about 42% of the volunteers were unaware about cervical cancer and its deleterious effects. We elaborated on cervical cancer, its effects, diagnosis methods and currently available treatments for the disease.

Since cancer happens to be one of the most commonly known diseases, we asked the volunteers to share their knowledge about cervical cancer by asking them if they knew about the symptoms of the disease. We found that about 69% of the volunteers were unaware of the symptoms of cervical cancer. In relation to our previous question, this happened to be quite contrary as 54% of the volunteers said they knew about the disease. This showed that the volunteers only knew the tip of the iceberg about the disease and are in need to be informed more about the same. Since this happens to be an important aspect to drive people to take up timely tests, we provided the necessary information regarding the same and how these symptoms could be unnoticed in day-to-day life.

Since Pap smear test happens to be an invasive procedure, we wanted to know about the volunteers’ opinion on how painful this test may be in their perspective. Based on our description about the Pap smear test and a few people who knew about the same, we got to understand that about 83% of the volunteers felt that the test could be painful and would not want to opt for a regular check-up owing to the pain involved during the procedure. This data seems quite reliable as the need to take up a Pap smear test as a pre-cancerous diagnostic test, as pointed out in one of our IHP sessions with Dr. J. S. Malliga, spreads only through word of mouth or any public awareness campaigns where the general public are prone to avoid the test based on such explanation about the same. Moreover, the test procedure is considered to be a social taboo among various Indian subcultures which makes the people more hesitant to take up the test.

The previous question was followed by their view on requirement of an alternative diagnosis procedure to Pap smear test. About 68% of the volunteers agreed for an alternative procedure that would be less painful, minimally invasive and more comfortable than the Pap smear test while, about 9% of them felt that shifting from the gold standard technique could result in a false diagnosis.

We wanted to know the volunteers’ opinions on the need for a non-invasive testing procedure that could replace Pap smear test as an early diagnosis system for cervical cancer. Although this question was biased, it was essential for us to ask them about their choices. As expected, most of them (81%) opted for a minimally invasive detection system citing the need for a pain free diagnosis procedure. This supported our project as we planned to design a pain-free diagnostic system that uses blood constituents to detect possibilities of cervical cancer. We then explained about our project to the volunteers to get their feedback on the same.

Based on the explanation about our iGEM project, we asked the volunteers to cast their opinion on our work and how they felt about the need for such a product in the market and how it could be beneficial to the general public as a potent early diagnosis device. Most of the volunteers happened to support our project and felt that such a system could be efficient and easy, which would make many more women to opt for frequent check-ups.
Online Survey on Cervical Cancer Awareness

The iGEM SASTRA Team had conducted an online survey regarding cervical cancer and its various facets related to cervical cancer. We received a total response of 223 from all around the world with mixed gender responses. With respect to the age group, the response seems to be distributed across ages with the highest responses from the age group of 21-30, the likely age group of women who are prone to cervical cancer and hence, would require awareness about it. From among 223 responses, 87% of them happened to know about cervical cancer. This is such a positive aspect as knowledge about the disease could drive the people to take-up timely check-ups and ensure that they do not have the disease. For the rest 13%, we hope this would be a start for their quest to know about cervical cancer and its effects.

Upon enquiring about the various screening methods for the disease, most of them happened to know about the existence of Pap smear test, which happens to be the gold standard for early detection of cervical cancer. Some of them also knew about the possible alternatives that are also used as a preliminary test for cervical cancer detection.

This is similar to the previous question. Since the responses were from both genders, we were not able to differentiate the percentage of women who had not taken-up the Pap smear test. But, about 33% of them said that they have taken-up the test at least once, which seems positive.

We wanted to know how painful the test will be from their perspective. To know about this aspect, we asked them to grade their pain on a scale of 1 to 10, where 10 is considered very painful and 1 to be the least painful. Most people answered that the test is less painful, with only 3% saying that it is very painful. This made us understand that Pap smear test is infact a less painful procedure but most of them ignore taking the test because they think the test is painful.

When asked whether they would recommend the Pap smear test to others, about 83% of them responded yes even though the test is considered painful and uncomfortable as it is a gold standard diagnostic tool for cervical cancer.

When asked about their preference for an alternative to present diagnostic methods, 72% of them said yes. This was mainly because all the conventional testing methods need a sample from the cervix, which people may feel uncomfortable.

HPV vaccination is an important step to prevent cervical cancer. When asked about whether they had vaccinated for HPV before, 82 % of the volunteers said no. This is alarming because our team believes in, “Prevention is better than Cure”. Thus, getting vaccinated for HPV is essential.

From this survey responded by 223 people, we believe that at least now, those who lacked or possessed less knowledge on cervical cancer, Pap smear test and its importance, would search about it or will ask for the same to their doctors and join us to reduce the disease burden.