We set out to design a diagnostic portable biosensor available both to tourists and specialists studying infectious diseases. To advance our understanding of Lyme disease and portable biosensors as well as to consider introducing our project to the market we held a number of the following events:
Working on our device we discovered that it is potentially useful for veterinary medicine. Therefore, we discussed the project with a veterinarian and met representatives of the veterinary industry at PetZoo exhibition.

Concerning educational activities, we delivered a lecture at the Boot Camp on genomic engineering for talented students of 10th grade at Moscow Institute of Physics and Technology (MIPT) as well as organized a two-week student practice on synthetic biology for 3rd-year students of Department of Bioengineering, Biological Faculty of Lomonosov Moscow State University (MSU).
To draw public attention to the problem of tick-borne diseases, borreliosis, in particular, we took part in a number of scientific events. We delivered a lecture at the popular science festival Science Bar Hopping and demonstrated our devices at the largest All-Russia Science Festival 2019. We discussed the problem of tick-borne diseases, our solution and our decision to participate in iGEM contest with many popularizers of science. Furthermore, we presented our project to Sergey Ryazansky, a Russian test cosmonaut and the first scientist in the world to command a spaceship. Social, News and TV
While working on our project, we appeared in Moscow evening news and about 10 major media outlets, including RIA Novosti, distribute our press release. 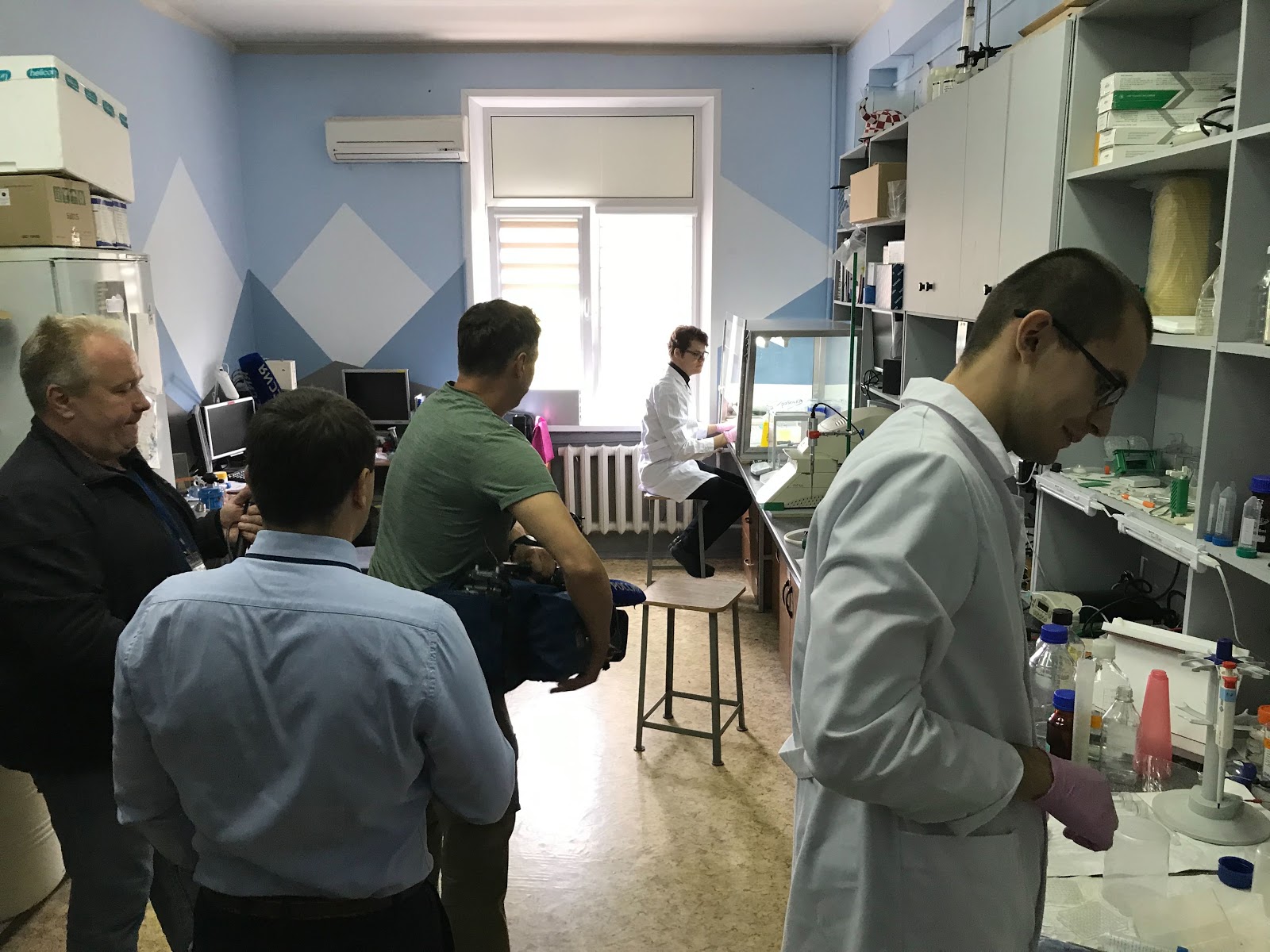 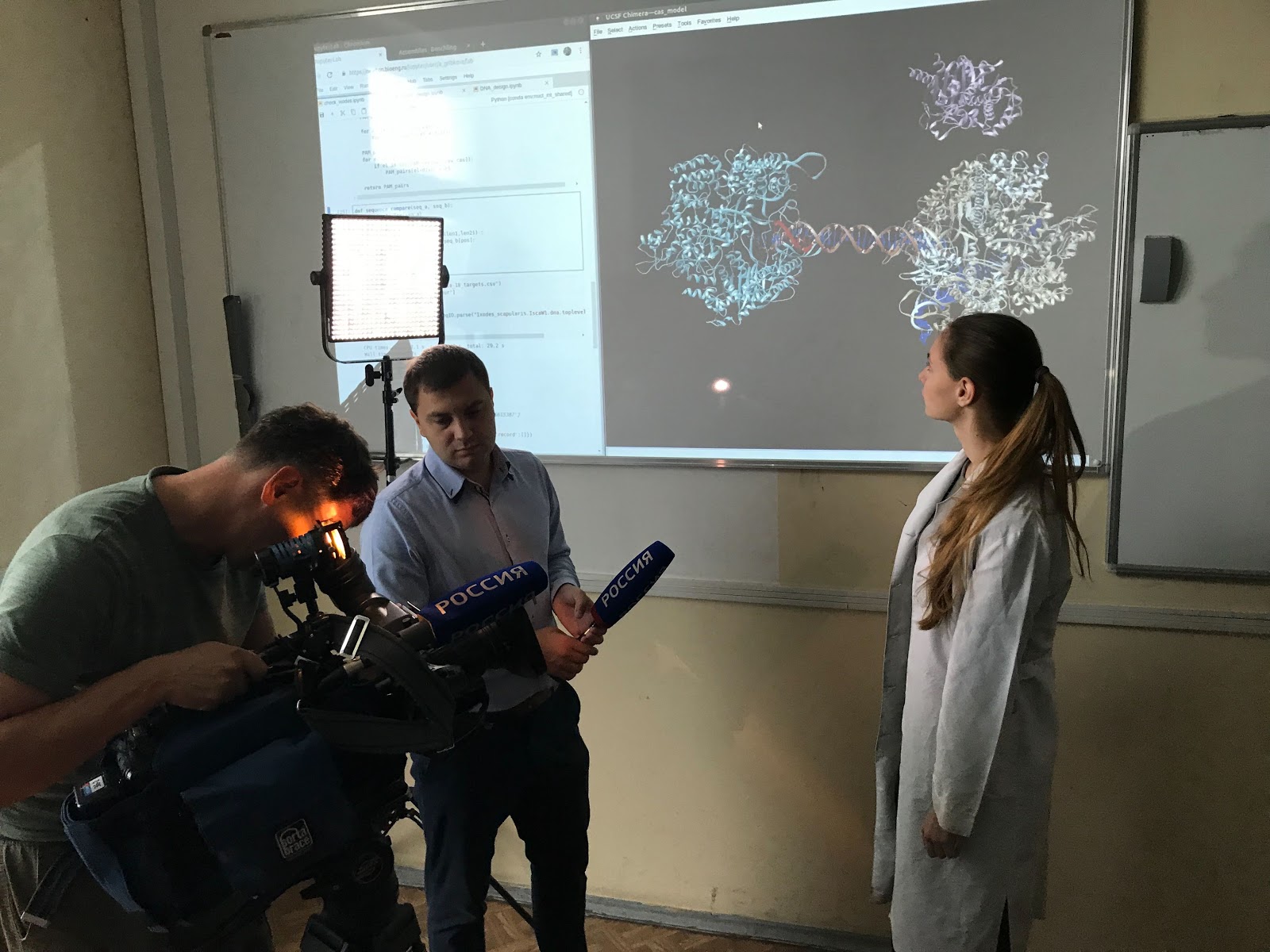 Podcast for Medical Channel
We also recorded an educational podcast (in Russian) in which we discussed the iGEM contest and our project in detail, as well as shared our experience of organizing teamwork. The podcast is available at https://medach.pro/post/2165
The Medical Channel is a portal for young doctors and students of medical universities. It provides information on the recent advances of modern medicine, facilitates the exchange of knowledge and experience, as well as produces supporting materials for medical education and practice. Medical Channel won the nomination of ‘The Best Media about Science’ at the 2017 All-Russia Media Forum.
Articles in popular-scientific journals
We wrote two articles based on the results of our project. We wrote an article with the title: "How to defeat Borreliosis? New diagnostic test" (in Russian) for the portal devoted to the news in neuroscience called "Neuronews".
We also wrote an article for the Biomolecula portal, a popular-scientific site focusing on molecular bases of modern biology and practical applications of scientific breakthroughs in medicine and biotechnology. Our article "LymeExpress: students fighting against tick-borne infections" takes part in the contest for the best popular-scientific article on modern biology, "Bio/mol/text-2019". 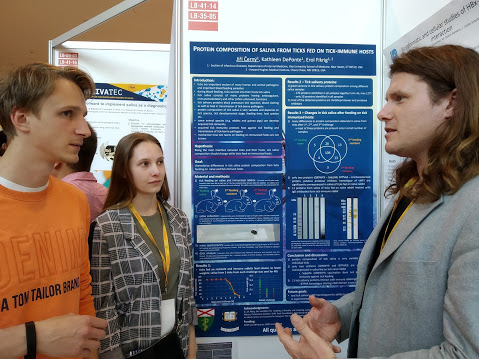 At the FEBS congress 2019 in Krakow, Poland part of our team met with Czech biologist from Yale University School of Medicine - Jiri Cerny. It was a short, but very productive talk. Jiri Cerny works on the protein composition of saliva from ticks fed on tick-immune hosts. Also, he is a great specialist in tick-borne diseases and kindly shared information about Borrelia:
26/06/2019 Sergey Shmakov, Skoltech Center of Life Science 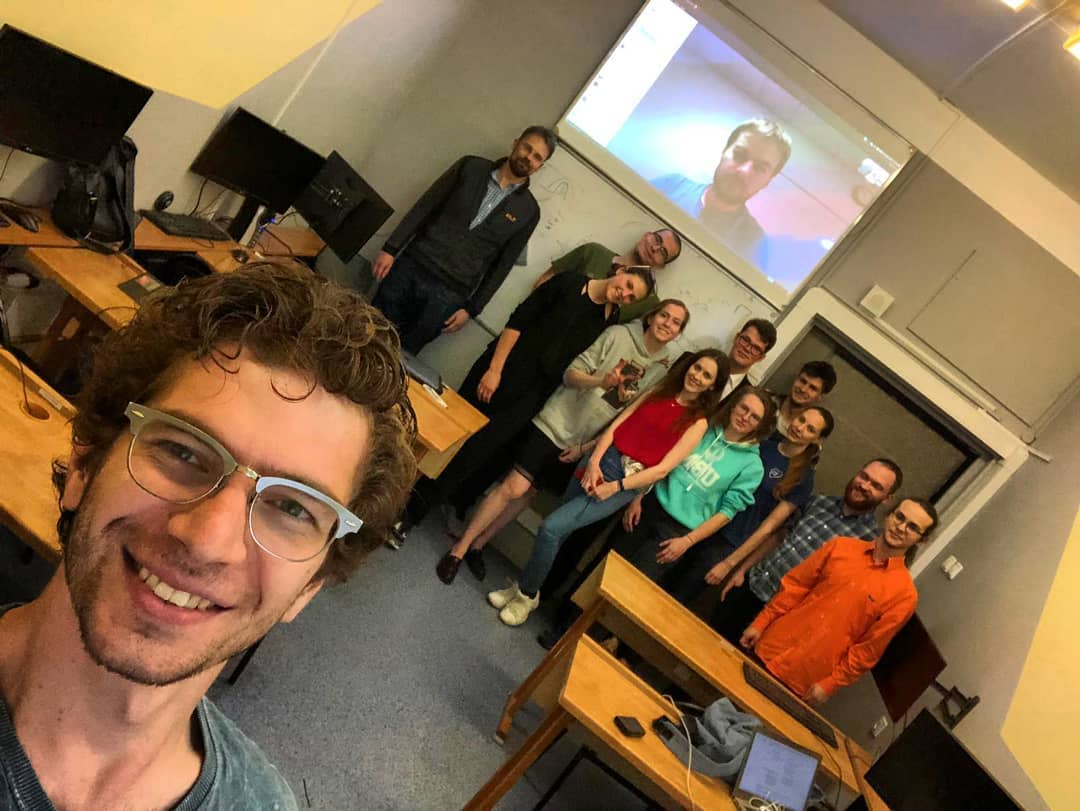 We had a team skype meeting with Skoltech research scientist Sergey Shmakov, Ph.D., who is a specialist in discovery and functional classification of diverse Class 2 CRISPR-Cas systems.
During our long online conversation, he explained some aspects and subtleties of these systems. Furthermore, Sergey gave us some advice on our project. Firstly, he asked us to be very careful while choosing the parameters of Cas-proteins, then, he explained the difficulties of the project and some ways to solve them.
24/07/2019 Nikolay I. Briko, Head of Epidemiology of Russia 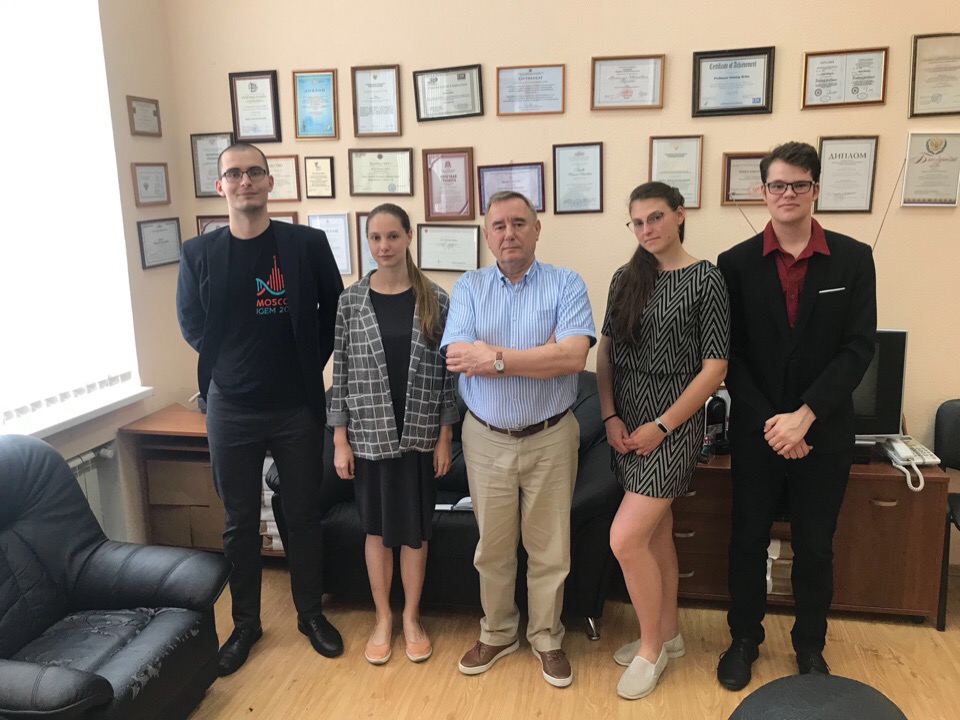 Nikolay Briko gave us very important information about tick-borne disease statistics and importance:
As far as we live in Moscow, we asked about statistics in our region. There is no Encephalitis in Moscow (But there are in some regions of Moscow region) and almost 70-80% of ticks tolerate borreliosis.
Then Nikolay Briko gave us an adviсe on our work. He asked us to create a system for detection not only one infection (borreliosis), but all four mentioned above. He also admired that we are making a quick detection system that does not need laboratory equipment, which is very important.
Nikolay Briko suggested inviting talented students from Sechenov University to the team, as well as to test our sensor in a specialized biosafety level 2 laboratory.
01/08/2019 A LOOK FROM WITHIN While working on the project, a member of our team was bitten by a tick in the country. Thus, we took the opportunity to learn about the diagnostic methods from within. The removed tick should be analyzed in the department of especially dangerous infections of the microbiological laboratory in the Center for Hygiene and Epidemiology in Moscow. From May to November, the department is very busy, there is always a long line for making an appointment or payment and delivering the tick for analysis. The results of testing the tick for four infections (borreliosis, anaplasmosis, ehrlichiosis, and tick-borne encephalitis) are available on email the next day. In a tick sample of our team members, the DNA of a tick-borne borreliosis pathogen was detected. According to the recommendations of the Federal Service for Supervision of Consumer Rights Protection and Human Well-being, one should seek medical help to prevent tick-borne borreliosis no later than the 4th day (96 hours) after the tick bite. A serological examination of the patient’s blood for the presence of antibodies to tick-borne borreliosis pathogens cannot be conducted earlier than 2-3 weeks after the tick bite.
12/08/2019 The Boot Camp on genomic engineering for talented students of 10th grade at Moscow Institute of Physics and Technology (MIPT). Concerning educational activities, we delivered a lecture for talented students of the 10th grade at the Boot Camp on genomic engineering at MIPT. We discussed biosensors and CRISPR/Cas systems in detail, as well as specified different aspects of our project, in particular, bioinformatics analysis. Furthermore, we introduced the iGEM contest to the schoolchildren and inspired them to participate. We hope that a school team from Russia will take part in the contest next year.
15/08/2019 Maria Kurilina, Yuri Nikolsky
We had a skype conversation with Yuri, the science ex-director of the biomedical technology cluster, Skolkovo Foundation, and Maria.
Maria has been fighting Lyme disease for 8 years, and Yuri plans to study the distribution of TCR and BCR by repertoire and clonotype in patients with Lyme disease.
We learned about the current state of diagnosing and treating Lyme disease in the USA, as well as the latest news from the largest conference on treating Lyme disease - International Lyme and Associated Diseases Society (ILADS). The major problems of diagnosis are the following: not all patients develop antibodies, not every patient has erythema, Borrelia dwelling in adipose tissue and joints cannot be detected using blood samples.
We received positive feedback and learned about strategies for presenting our project to different target audiences. Moreover, we have obtained the data on other detection methods to improve our presentation.
20/08/2019 Vladimir A. Gushchin, Laboratory of Population Variability Mechanisms in Pathogenic Microorganisms N. F. Gamaleya Federal Research Center of Epidemiology and Microbiology of Ministry of Health of the Russian Federation During the meeting, we discussed the project and went on an excursion to the aerosol test room. We were shown how portable PCR-machines are developed and how molecular systems - magnet balls with Cas-proteins attached to their surface and ball-shaped chips with reaction mixture in them - are designed. We considered the technical details of the biosensor filling and possible alternative solutions, for example, a graphene chip with a Cas protein attached to it. The researchers shared their experience in homogenizing arthropods.
Suggestions for our device:
We have taken these suggestions into account.
01/09/2019 Science Bar Hopping Science Bar Hopping is a popular-scientific festival held annually in Moscow. By fascinating and inspiring lecture speakers of the festival try to show "why science is real rock'n'roll". Young scientists talk about their studies in Moscow bars, 40 lectures in 20 bars for one evening. Science Bar Hopping provided a wonderful opportunity for us to introduce our potential solution to the problem of tick-borne diseases and to spread the information on the iGEM contest.
11/09/2019 Andrey Afanasiev, CEO & Cofounder at yRisk Andrey Afanasiev is a skilled founder of bioinformatics companies with considerable experience of presenting to both scientific community and investors. He gave us some useful tips on our presentation mainly concerning the key features of the American mentality. We also discussed the techniques for establishing contacts with large biotech companies. Furthermore, he touched upon launching and managing a biotech company and warned us against typical and non-obvious mistakes, especially with IP and regulators.
19/09/2019 Alexandra M. Pianova, Deputy Chief Doctor of the 'Center' veterinary clinic on Tsvetnoy Boulevard
Talking to a veterinary practitioner allowed us to build up a detailed picture of tick-borne diseases in dogs and methods of their diagnosis and treatment. We learned that the most common infections in dogs are babesiosis, borreliosis, anaplasmosis, and ehrlichiosis. Borreliosis in dogs is caused by the same bacteria as in humans. During its onset, the disease manifests itself through weakness which may pass unnoticed by the owner; a year later the chronic form follows. According to the veterinarian, public awareness of tick-borne diseases has considerably raised recently. Therefore, nowadays dog owners often send ticks for PCR analysis. Pills for dogs preventing ticks from sticking are readily available. Although the medicines proved to be effective, not all dog owners follow the treatment regimens. Thus, the issue of diagnosing tick-borne diseases in dogs remains relevant. According to Alexandra M. Pianova, our device would be very useful for veterinary institutions.
01/10/2019 Y. Petushkova, Senior Researcher, at the Bioengineering Department, Faculty of Biology, lawyer
We consulted a lawyer to clarify the issues of patenting our developments, registering medical devices and introducing our product to the Russian and international markets in the future.
20/09/2019 ParkZoo exhibition At the 9th ParkZoo International Pet Industry Specialized Exhibition, we approached the representatives of AV3, the leading manufacturer of veterinary medicines in Russia. Unfortunately, the company representatives were not interested in our project. Perhaps, they might have regarded us as their future competitors.
11-13/10/2019 All-Russia Science Festival 2019 Moscow State University is the central venue of the Science Festival, the largest popular-scientific event held annually in Russia. The festival aims to make science understandable and accessible to the general public by explaining what scientists do, how scientific research improves the quality of life and what opportunities it provides for contemporary society. During the festival, the whole world of science opens up allowing the visitors to get first-hand information about what is happening at the cutting edge of science and technology. That is why the Science Festival in our country has chosen an eloquent motto: “Touch the science!”.
Our team organized a stand, where we demonstrated our device, a portable spectrophotometer, and held workshops on extracting 3D-ticks from skin models. Our stand was immensely popular with both children and adults. Non-specialists were interested in our device as many of them were bitten by ticks, but only a few sent the ticks for analysis. We educated the audience on tick-borne diseases, the ways to prevent tick bites and what to do after the bite. Numerous students of other Moscow universities have expressed interest in the iGEM contest.
Furthermore, our team gave a talk at the section "Research and Development in Priority Fields of Biology and Medicine", held at the Faculty of Biology of Moscow State University.