After a long summer and hard at work in the lab, we have the pleasure of showcasing one of our gold achievements: the improvement of a previous iGEM part. This year, the University of Manchester tackled the often-used green fluorescent protein.

Change of Promoter: Achieved improvement of expression of sfGFP by changing the promoter from T7 (BBa_I746909) to pTet (BBa_K2906000). This allows sfGFP to be more tightly controlled and to express higher levels of visible fluorescence, especially in the first few hours.

Improvement – it ends, and it begins

Or: where things are cycles, and there is always room for growth. Also: something old, something new, something borrowed but not quite blue!

”Like dwarves on the shoulders of giants” – Bernard de Chartres

We wanted to show the improvement of BBa_I746909 (sfGFP expression regulated by the T7lac promoter) by comparing it to its expression using a TetR promoter BBa_K2906000.

Table 1. BioBricks used for comparison. In grey, the iGEM provided and below (white) improved.

BBa_K2906000 was designed, cloned and verified through sequencing into pBbB2c. On the other hand, BBa_I746909, was provided by the 2019 iGEM kit plate (located on 7M kit plate 3) and was originally located on pSB1C3. This backbone has a pMB1 origin or replication and therefore has 100-300 copies per cell. Additionally, pSB1C3 lacks a lacI copy and hence it relies on the bacterial endogenously expressed lacl (single copy); therefore, expression would be diminished (Knight, 2004). In order to achieve a fair comparison between both promoters, BBa_I746909 (RBS and sfGFP, with the use of T7 promoter) was cloned to pBbB7c. Both pBbB2c (cloned with BBa_K2906000) and pBbB7c (cloned with BBa_I746909) are BglBrick plasmids which use a pBBR1 origin or replication and therefore have a plasmid copy number of around 20 copies per cell. This is the second highest origin or replication in BglBrick plasmids (Lee et al, 2011). This origin or replication was selected as we wanted to avoid toxicity of over-expressed sfGFP.

Both plasmids were therefore designed to contain the same:

• linker sequence between promoter and sfGFP.

Variations in any of these could affect expression.

”Without continual growth and progress, such words as improvement [...] have no meaning” – Benjamin Franklin

In order to transfer BBa_I746909 to a different backbone, Gibson assembly was used. The designed primers are shown below:

Table 2. Primers used for Gibson assembly in order to transfer BBa_I746909 from pSB1C3 to pBbB7c.

After assembly, correct insertion was verified through sequencing (Eurofins).

Once we achieved successful cloning of both of our constructs into their respective plasmid backbones, the plasmids were transformed into E. coli BL21(DE3). This experiment was only tested in the BL21(DE3) strain, as expression of the lacP requires T7 polymerase. From the fresh transformant plates (LBA + Cm, incubated at 37ºC overnight) a single colony was picked and inoculated in 5 mL of LB media. Additionally, as a negative control, an E. coli TOP10 strain (chloramphenicol-resistant, available in house) was used as it does not express colour. The TOP10 strain followed the same protocol as sample cells, however, it was not induced after reaching the desired OD600. The inoculations were placed at 37ºC with shaking at 180 rpm for overnight growth. After 16-18 hours of growth, the cultures were re-inoculated as a 1:100 dilution in 50 mL LB containing 34 µg/ml chloramphenicol (1 L conical flask). The cultures were grown at 37ºC (180 rpm) with OD600, monitoring up to a desired OD600 = ~0.6. Once the desired OD600 had been reached, a 5 mL sample was centrifuged to acquire a pellet and another 5 mL sample was obtained for SDS-PAGE. Samples were induced with 100 nM of anhydrotetracycline or 50 µM IPTG for BBa_K2906000 and BBa_I746909 respectively. 200 μL of each grown and induced culture was transferred onto one well of a 4titude black, clear-bottom sterile 96-well plate, in triplicates. A plate reader (CLARIOstar®, BMG Labtech) was used to measure OD600 and GFP every 15 minutes overnight/24h. The remainder of the culture in the flasks were incubated at 30ºC with shaking. Every hour for 4 hours after induction, a 5 mL bacterial culture was obtained to form a pellet (Figure 2). After overnight incubation at 30ºC with shaking at 180 rpm, a 5 mL sample was obtained for SDS-PAGE and an additional 5 mL sample was centrifuged to retrieve a pellet. Microplate reader results were then collected, analysed and plotted.

”I’m possible” – Impossible, through the Glasses of Creativity

After induction, 200 μL of each culture were transferred onto a 4titude black, clear-bottom, sterile 96-well plate. Of each sample, 3 technical replicates were performed. The plate reader (CLARIOstar®, BMG Labtech) was used to measure OD600 and GFP every 15 minutes overnight (13 hrs). The following morning, the data was obtained, analysed and plotted by blank-correction using both LB-containing microplate wells (OD measurements) as well as E. coli TOP10 cells as a control for fluorescent blank correction since they do not express fluorescence.

Initially, growth curves were plotted. This allowed us to identify normal growth of all 3 bacterial cultures (TOP10 and BL21(DE3) with BBa_K2906000 and BBa_I746909) (data not shown). We then looked at the fluorescence measurements, which were normalised by dividing the RFU by the OD600 of each individual culture, results were averaged. Below we show the processed results. 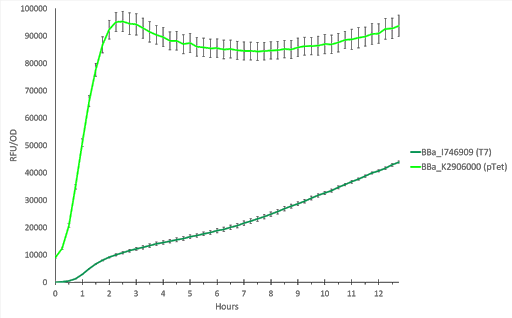 Figure 1. The plot shows the mean RFU/OD from three replicates of each construct expressed in E. coli DH5⍺ and BL21(DE3). The OD was measured at 600 nm and GFP fluorescence was measured at Ex ƛ 485, Em ƛ 510, every 15 minutes for 13 hours. The RFU values were normalised by the OD600 and the triplicates averaged. All values have been blank-corrected. A total of 52 recordings were made per well, with three wells per construct.

From Figure 1 we can observe a quantitative comparison in expression of sfGFP between T7 and pTet promoter respectively. From the start of the assay the expression of sfGFP was significantly higher in BBa_K2906000 than in BBa_I746909 showing a clear improvement in this new part. However, it is important to mention how BBa_K2906000 seems to reach a plateau after 4 hours of measurements whilst no clear plateau is detected for BBa_I746909. Therefore, in the time frame of our experiments we can only confirm that in the initial 13 hours sfGFP expression under pTet was substantially higher compared to the T7 promoter. Hence, BBa_K2906000 has proven to at least be improved for the initial 13 hours of expression.

Besides the characterisation of the absorbance and emittance spectra of these two sfGFP-expressing parts, we also wanted to visualise if the protein was being over-expressed. Additionally, we wanted to see if the chromoprotein was indeed autosecreting, as previously suggested by published data, crossing the bacterial membrane (Zhang et al., 2017). For that reason, a 5 mL sample was obtained both at time 0 before induction, and following induction and overnight incubation at 30ºC. 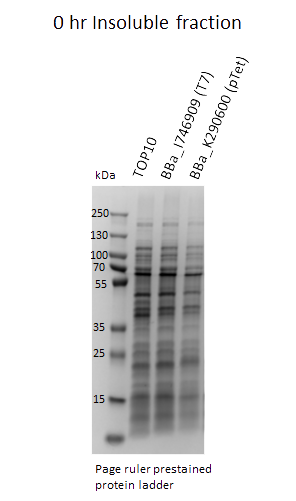 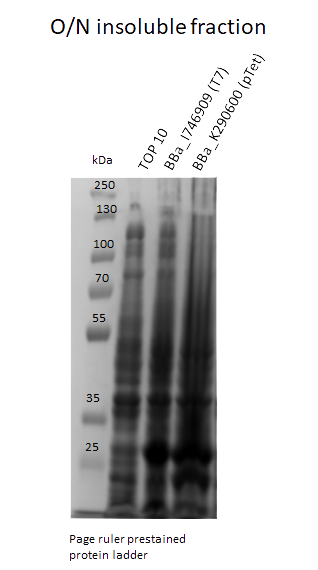 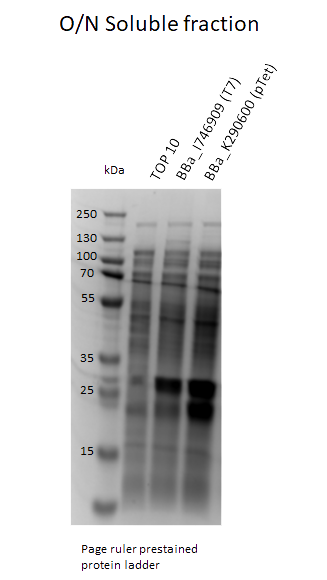 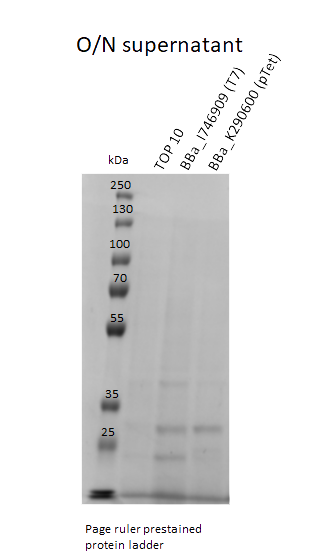 Figure 2. SDS-PAGE gels (Mini-PROTEAN TGX Stain-Free Precast gels 10%). Constructs both with the same expected molecular size of sfGFP (26.8 kDa) were checked for protein expression. Supernatant, soluble and insoluble fractions were all analysed during this experiment.

From our SDS-PAGE results we can visually observe protein overexpression in both the T7 and TetR regulated sfGFP as the band is located at the correct position in the gel. We cannot elucidate a significant difference between band size in neither the insoluble, insoluble fraction or the supernatant.

To aid visualisation we have additionally provided a table summarising our SDS-PAGE results.

From Table 3, SDS-PAGE Results, we can visually observe protein overexpression in both the T7 and TetR regulated sfGFP as the band is located at the correct position in the gel. 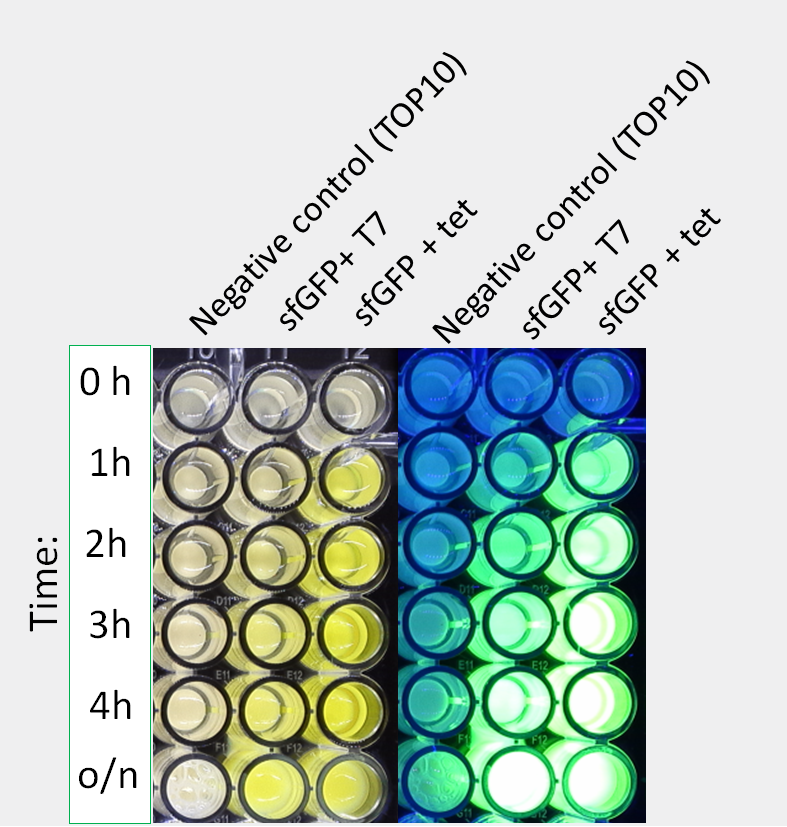 Figure 3. Bacterial cell pellets from a 5 mL culture placed on a 96-well plate with transparent bottom. Cell pellets were obtained at different time points: where time 0 indicates a cell pellet before induction (once cells had reached the desired OD600 of ~0.6) ; time 1 h, 2 h , 3 h and 4 h show cell pellets obtained every hour for the initial 4 hours after induction with anhydrotetracycline or IPTG for TetR and T7 respectively; O/N represents the cell pellet obtained after overnight incubation at 30ºC. Plate was imaged both under normal light and UV light respectively for visualisation purposes only.

Visually, we can observe the colour difference between the two samples. This is particularly significant during the initial 2-3 hours. However, as elucidated by our microplate fluorescence measurements (Figure 1), this trend remains true over the 13 hours of monitoring. Therefore, the pTet expression was seen to be tightly controlled and faster to express than T7 based on qualitative data (Figure 3) and the plate-reader data (Figure 1).

We additionally decided to use fluorescence microscopy to check fluorescence in bacterial cells. This was done to identify if there is a difference when samples are imaged using a fluorescence microscope. The images provided are therefore representative of 2 µL of culture. The procedure was followed according to protocol and results are shown in the figure below:

From Figure 4 we can observe a representative image seen under a fluorescence microscope. Here we can highlight sfGFP expression under both T7 (BBa_I746909) and pTet (BBa_K2906000) promoter respectively. Additionally, the TOP10 strain was used as a negative control as it does not express colouration. However, no direct comparison can be achieved as the OD600 was not equivalent between the two samples. From the images above we can highlight a higher heterogeneity in the T7 promoter construct which presents more cells which are not fluorescent.

”By continuously trying, one always succeeds. So: the more something fails, the likelier it is to work” – Rouxel, Shadok Motto

Through our experiments we were able to demonstrate the improvement of BBa_I746909 by changing the promoter from T7 to pTet. The expression of sfGFP under pTet promoter BBa_K2906000 constitutes an essential composite part which as presented in this page provides a much higher and controlled expression (since pTet is less leaky than T7) of sfGFP. Therefore, this newly registered part can now be used by other iGEM teams in a whole range of different project as it is not limited to hair dye production. Additionally, we have provided extensive characterisation with both quantitative as well as qualitative data of both BBa_I746909 (in this page for comparison purposes) and BBa_K2906000, as this part was also tested as a potential hair dye (to learn more, see our colours page).